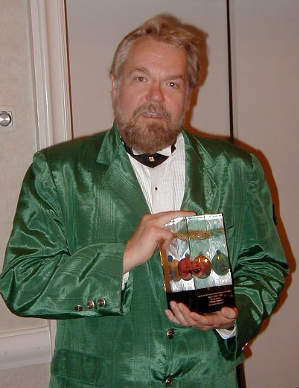 Walter Jon Williams (born 1953) is an American Science Fiction writer, generally known for not having a signature style. He has written everything from Cyberpunk (and Post-Cyberpunk) to Comedy of Manners; from Space Opera to Police Procedural. All available evidence suggests that Williams does not like being pigeonholed. (His fondness for games has caused some to try to pigeonhole him as a gamer, but a survey of his work will reveal that this is an incomplete description at best.)

Among his better known works are the early Cyberpunk novel, Hardwired, the Post-Cyberpunk novel Aristoi, the humorous Drake Maijstral series (The Crown Jewels, House of Shards and Rock of Ages), the epic Dread Empire's Fall series (The Praxis, The Sundering, and The Conventions of War), and the Dagmar Shaw thrillers (This is Not a Game, Deep State, and The Fourth Wall). He has also written a novel in the Star Wars Expanded Universe, The New Jedi Order: Destiny's Way, and the straight-up historical Privateers and Gentlemen series. He was also a frequent contributor to George R. R. Martin's Wild Cards series.

Two of his early works, Knight Moves and Hardwired, were homages to Roger Zelazny's works, This Immortal and Damnation Alley, respectively.

Not to be confused with the other Walter Williams.