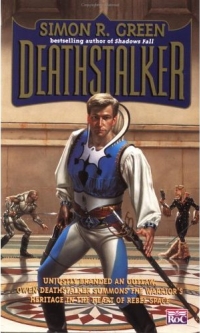 It's a bad old time for Humanity in general. The human Empire is presided over by Empress Lionstone, aka the Iron Bitch, a ruler who makes Josef Stalin look like Gandhi. Everywhere in the Empire, rebellions are popping up and popping heads as fast as one can blink, and are slaughtered with utmost efficiency. Espers, clones, degenerates, and slaves are ubiquitous, treated as third-class citizens when they're not being tortured, experimented on, or simply shot. And, for once in the Empire's history, nobody is truly safe — be it noble, commoner, or servant.

That's not the worst of it, though. From the borders of the Empire, a number of threats have arisen: a group of formerly subservient AIs which broke free of their programming and formed the planet Shub, driven to exterminate their old masters; the Sleepers, a group of aliens genetically engineered as weapons, intended to destroy all in their path... and other horrors from beyond the Darkvoid, a multiple-light-year-wide sphere of death which the Empire created hundreds of years ago. Oh, and that's still nothing compared to the court intrigues, only kept at bay by the terror the Empress bestows upon her subjects.

The eight-book Deathstalker series, written by Simon R. Green, drops the reader right into the midst of this, beginning with the outlawing of one Owen Deathstalker, an aristocratic historian who just wanted to relax in comfort on his idyllic, pastoral homeworld. That changes fast, and he's forced to take up arms with the smuggler Hazel D'Ark, the bounty hunter Ruby Journey, the hero of the rebellion Jack Random, and the former Hadenman Tobias Moon... as well as a host of other unsavory characters, all of whom are out for themselves as much as anything.

In short, the Deathstalker series is a Fantasy Kitchen Sink Space Opera and is sliced up into hundred- or two-hundred-page sections which could generally stand as stories on their own right. The recipe is simple: one part Star Wars, two parts French Revolution, and a dash of Affectionate Parody, satire, and Lovecraftian horror, liberally sprinkled with Funny Moments. One can expect quite a lot of Shocking Moments when explaining any given segment, particularly as one reads further on. Finally, outside of the series itself, there are a handful of other stories written by Simon R. Green in the same universe, including the compilation Twilight of the Empire.

The series basically exits in three parts: Twilight of the Empire gives some important but ultimately optional backstory to important locales like Mistworld and Unseeli, and important characters like Silence and Carrion. The next five novels revolve around Owen Deathstalker, the rebellion against Lionstone, and the efforts to reforge the Empire into something better. The last three books take place 200 years later, show what the efforts of our heroes ultimately wrought, and conclude the series on pretty much a happy note.

The page was becoming more than an entry. A whole greater than the sum of its parts...