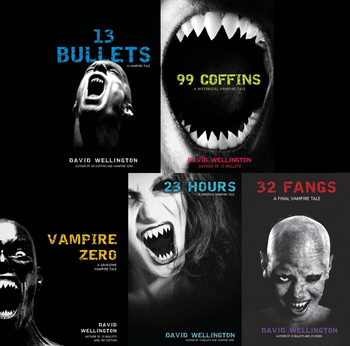 Laura Caxton is the heroine of David Wellington's Laura Caxton vampire series. The pentalogy includes 13 Bullets (2006), 99 Coffins (2007), Vampire Zero (2008), 23 Hours (2009), and 32 Fangs (2012). Although Laura is an attractive young woman and a lesbian, this is not a sexy vampire series. Vampires in this world are creepy, hairless albinos with pointy ears and more sharklike teeth than can fit in a human mouth. They're more likely to rip off your arm or head to drink your blood instead of piercing your neck daintily with a couple of enlarged canines.

Since you're unlikely to survive being eaten intact, it's fortunate (for the vampires) that vampirism isn't transferred by blood. Instead, the curse is transferred psychically through the silent ritual. Some people can fall for it instantly, but others like Laura can resist for hours. In either case, the victim has to commit suicide to rise as a vampire the next night. You kill them by destroying the heart, though you don't need a Wooden Stake to do so. In fact, there's almost no hope that a wooden stake could pierce a vampire's chest in this series.

The series features a mix of fantasy and real-world elements, as Laura employs the aid of magic charms and psychics in addition to her use of guns and other modern devices.