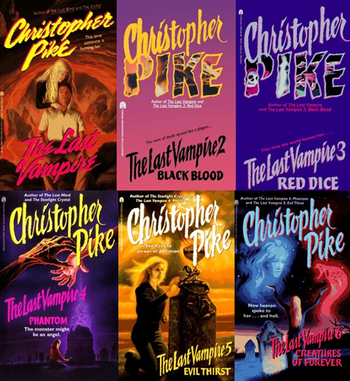 A series of nine books by Christopher Pike. There were originally six books which were first released in the early 1990's. Then with the resurgence of the 'vampire' in the teen fiction market, they were re-released in 2009/2010. A seventh book was released in late 2010. An eighth and ninth have also been released in 2011 and 2013 respectively.

The protagonist is the vampire Sita, who was the lieutenant of the first vampire, Yaksha, as well as the target of his affections. Thousands of years ago, Yaksha created a whole army of vampires and intended to take over the world, only to be stopped by the Messianic Archetype (Krishna), who made him vow to destroy all of the vampires as penance. The first novel begins with Yaksha's quest nearly completed, in modern times, with only he and Sita still alive. The novels show Sita's relationships with humans and battles with enemies that are more powerful than her. Though it all, she just wants to have a family, having lost her original family when she became a vampire 5,000 years ago. Each volume offers a mix of present day action, and flashbacks to previous eras in Sita's life (sometimes hundreds of years in the past.)