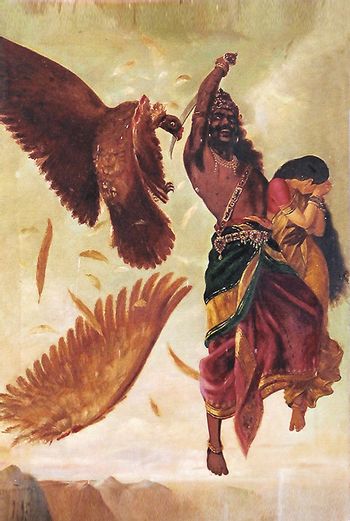 Ravi Varma's depiction of Sita being abducted
When to the end the tale was brought,
Rose in the sage's mind the thought;
Now who throughout this earth will go,
And tell it forth that all may know?
Advertisement:

The Ramayana is an Epic Narrative Poem written by one of Ancient India's oldest poets, Valmiki. It has also been influential in Hinduism as many Hindus celebrate Diwali in honor of the return of Lord Rama, his wife Sita and his brother Lakshmana from their exile of 14 years.

The epic begins in the city of Ayodhya whose king, Dasaratha, is in despair since he has no children to inherit his kingdom. He performs a great fire sacrifice and his three wives, in consequence, bear four sons: Rama, Bharata, and twins Lakshmana and Shatrughna. When Rama, his eldest and favorite son, turns sixteen, the sage Vishwamitra requests his help in taking down the demons. In other news, the neighboring King Janaka despairs that nobody can complete the Engagement Challenge to win the hand of his beautiful daughter Sita, as many suitors have tried and failed to even lift the bow of Shiva (which he ordered must be strung). Rama, naturally, breaks the bow, and marriages are arranged left and right between the two kingdoms. Rama and Sita reside together in peace for about a decade.

Dasaratha, having grown old, is about to hand over his position to Rama, however his youngest and favorite wife Kaikeyi convinces him to fulfill The Promise he had made years ago. She then asks that Rama be exiled for fourteen years and her son, Bharata, be crowned. Dasaratha reluctantly does so, but he dies of heartbreak not long after. Lakshmana tags along with Rama and Sita, leaving his own wife and twin brother behind in Ayodhya. Meanwhile, Bharata finds Rama in the forest and declares that the throne rightfully belongs to the latter. When Rama refuses, Bharata accepts, but threatens to kill himself if Rama doesn't promptly return when his exile ends.

Rama, Lakshmana, and Sita eventually settle into a life of exile. Surpanakha, a sister of the demon king Ravana, is entranced by the brothers' good looks and tries to seduce them. Ever faithful, Rama and Lakshmana deny her advances, and the latter cuts off her nose. Naturally, when Ravana hears of this, he's pissed off and orders the shape-shifting demon Maricha to turn into a golden deer. Sita is entranced by the deer, and asks Rama to capture it for her. He reluctantly leaves her under Lakshmana's guard, but when Sita thinks she hears him cry for help, she convinces Lakshmana to go after him. Of course, it was all a distraction, as Ravana kidnaps Sita and brings her to the island city of Lanka, separated from the mainland by a giant ocean, where he tries to force her to marry him.

The rest of the epic describes the Roaring Rampage of Rescue Rama embarks upon with Hanuman — greatest of the monkey heroes, trickster archetype, and son of a wind god — who helps him search for Sita when Sugriva, his leader, is returned to the throne of Kishkinda. Hanuman meets Sita clandestinely in Lanka and asks her to return home with him, but she denies his request, saying that Rama should be the one to rescue her. He is captured by Ravana's forces, but Ravana's righteous brother Vibheeshana convinces Ravana not to kill him and instead only burn his tail. Hanuman then torches the entire city.

What follows is Rama and company attacking Lanka by building a giant bridge. A lengthy battle then happens, in which Ravana is defeated. Sita is returned to Rama, but he doubts her chastity. She then goes through the Agni Parishka, where she steps into a fire to prove that she did not sleep with Ravana. The flames do not burn her, she is declared innocent, and the party returns to Ayodhya where they rule peacefully.

The Ramayana is a testament to the belief that good will always triumph over evil. Its characters are also what Indians believed to be "ideal" - ie. Rama is the perfect man, Sita is the perfect wife, etc. It has been adapted countless times and reproduced in India, Indonesia, Thailand, and most of South East Asia. It is subject to tons of Alternative Character Interpretation and Sadly Mythtaken. It also bears some similarities to The Odyssey and Journey to the West.

Received two television adaptations. The well known one was by Ramanand Sagar in 87-88, while a more obscure one was made by BR Chopra in 2000.

A rather unusual animated musical version of the story was released online, Sita Sings the Blues.

For a darker, longer ancient Indian epic, see the Mahabharata. It too also forms an integral part of Hinduism.

Tropes in Ramayana include: