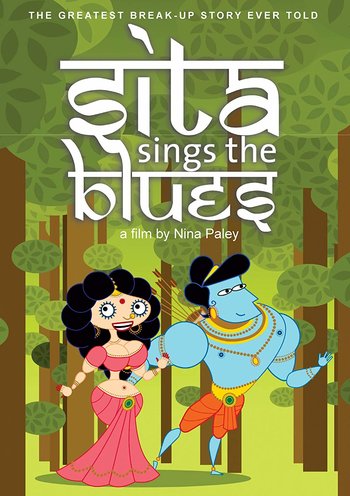 Sita Sings the Blues is a very independent 2008 animated musical film that portrays a portion of the Hindu epic, the Ramayana. It was created by Nina Paley, and the film is, remarkably, almost a solo effort.

The whole film is split into four different segments that are interwoven around one another. One of the main stories is set in modern times and depicts the director Nina Paley and her husband. At first, the couple are very close to each other, but after he is sent off to India and contacts her less and less, they begin to grow apart. Even after Nina flies out to India to be with him, she feels a distance between them.

The other piece shows parts from The Ramayana, which mostly detail Rama's banishing to the forest, Sita's kidnapping by Ravana, and the aftermath of this incident. One segment describes the parts of the story as they come along and are narrated by three shadow puppets. The shadow puppets not only tell the audience about the story, but also point out inconsistencies and their own interpretations of characters and other elements.

These are followed by the episode from The Ramayana, which includes dialogue from the characters. This segment is drawn to mimic the Rajput style of Indian art, which was used to illustrate some of the original versions of this particular epic. The animation here is rather limited, in order to look like illustrations. The dialog is somewhat more modern here as well.

The musical episodes then follow. They also show the portions from The Ramayana, but this time with less limited animation, and more cartoony character designs — the page image is from one of these sections. Throughout these parts, the action plays out with no actual dialogue from any of the other characters. Instead, Sita narrates the scenes via recordings of Annette Hanshaw, a 1920s jazz/blues singer. The songs here are juxtaposed in order to match the kind of emotion that Sita is going through at the time.

. It was followed up ten years later by Seder-Masochism which reinterprets Hebrew Bible events from the Book of Exodus.