Western Animation / The Sinking of the Lusitania 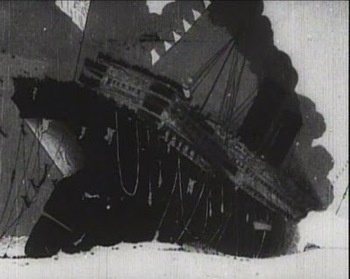 "The man who fired the shot was decorated for it by the Kaiser! AND YET THEY TELL US NOT TO HATE THE HUN."
Advertisement:

The Sinking of the Lusitania is a 1918 animated short film (12 minutes) by Winsor McCay.

It is Exactly What It Says on the Tin, depicting the sinking of RMS Lusitania on May 7, 1915, a turning point of World War I. The Lusitania was torpedoed by a German U-boat, having entered the maritime exclusion zone in which Germany had declared British shipping to be subject to attack. It sank in only 18 minutes. Although the sinking did not cause American entry into the war (the U.S. declaration of war came two years later), the loss of 1,198 lives, including 128 Americans, turned American opinion against the Germans and for the Allies.

Winsor McCay was a newspaper cartoonist and a pioneer of animation, having previously made the animated shorts Little Nemo and Gertie the Dinosaur. McCay, who was outraged by the sinking, spent his own money making an animated short that took two years of work. The animated portion of the short, 9 1/2 minutes after a live-action prologue, was the longest piece of animation ever created at the time. It was the first use of cel animation by McCay, who had done his previous cartoons completely by hand.