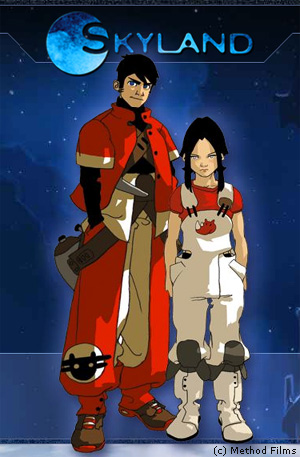 Skyland (full French title: Skyland, le nouveau monde, i.e. Skyland, the new world) is a Franco-Canadian CGI animated television series produced between 9 Story Media Group in Canada and Method Films in France. The series lasted from November, 2005 to April, 2007. A total of 26 episodes in two seasons. It aired on Teletoon in Canada and Nicktoons Network in the US.

It is the 23rd century; the Earth has shattered into billions of pieces which orbit around a central core. In this new world named Skyland, an evolved form of humans has appeared: Seijins, who are able to absorb energy from sunlight and use it to fuel special abilities such as telekinesis, telepathy, mental control, astral projection, energy balls/blasts and little electricity rays.

The Skyland is ruled by the Sphere, an organisation which controls the fragmented world's water supplies and maintains its power thanks to Guardians, promising Seijin children who have been taken away from their families and given a special training. This dictatorship is fought by pirates.

2451: After the capture of their mother by the Sphere, Mahad and Lena (a young Seijin still learning to control her powers) are rescued by a group of pirates. They join the pirate rebellion, determined to free their mother and help bring the Sphere down.

Don't confuse it for the unrelated Skylanders series of toys-to-life games, or the animated Netflix series loosely based on those games.