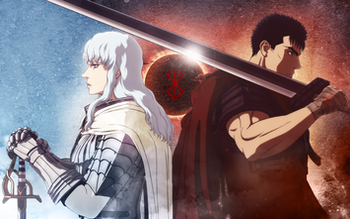 Don't go to the one on the left.
And probably not the one on the right either.
Demon Hunter: You often argue with Lyndon. Why?
Kormac: Our motivations are complete contradictions of one another. I am driven by honor and the good of others. He is driven by greed and a calling that comes from below his waist.
— Diablo III
Advertisement:

Two male characters portray different aspects of masculinity. The Noble Male is generally world-wise, gentlemanly, and sophisticated—while the Roguish Male is generally street-wise, grizzled, and uncouth. The former will generally focus on a single special lady and treat her with the highest respect while the latter tends more toward sleeping around with many women or is just not interested in sex and romance at all. If he is, romance with him is likely to be destructive, deadly even, if he is any good with women at all. Basically, the Noble Man is what the single woman is looking for and the Roguish Man what all the girls out there lust after.

Differs from Sensitive Guy and Manly Man in that the Noble Male is still very much considered "manly" — but is so in a more chivalrous fashion, rather than in an aggressive fashion.

A love triangle between them might be The Gentleman or the Scoundrel or a male version of Betty and Veronica. Also related is Red Oni, Blue Oni, with the Noble Male being the Blue to the Roguish Male's Red.

As with any two-character trope, the two characters have to have some sort of relationship with each other, be it friends, family, love interests, or rivals for a love interest, so the two characters can be playing the traits directly off each other. If they become enemies at some point, then it's Chevalier vs. Rogue. If they're in a military-like organization, they're often Captain Smooth and Sergeant Rough.