Literature / Shadow of the Fox 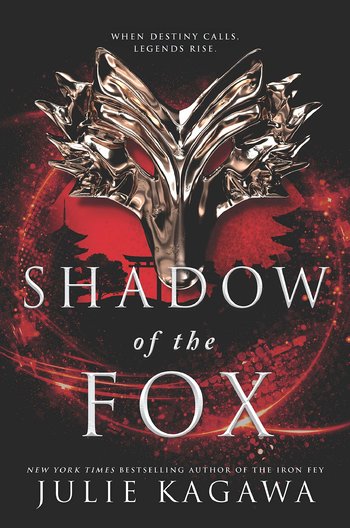 "It is very hard to be human, little fox. Even the humans themselves don't do a great job of it."

The Shadow of the Fox series is a series of Young Adult books by Julie Kagawa. Set in a fantasy version of Japan called Iwagoto, it centers around a Kitsune girl trying to protect a magic scroll and a shinobi boy trying to retrieve the very same scroll.

Long ago a greedy lord saved himself from the wrath of a sea dragon Kami with a prayer. Now the dragon reappears every thousand years, allowing the human who repeats this prayer word for word one wish. But after the last time ended in chaos and darkness, the scroll bearing the words of the prayer has been separated into three parts that are all kept safely and separately.

Yumeko is just another half-kitsune being raised in a temple and playing pranks on the monks when the head of the temple reveals a secret to her: Her temple is hiding one of the three scrolls, and soon the time will come again when the dragon rises and everyone will be trying to get their hands on the scroll. She has barely had time to process that information when her temple is attacked by demons, and she makes a narrow escape with the instructions to take the temple's part of the scroll to safety.

Kage Tatsumi is a shinobi with a cursed sword, instructed by his clan to retrieve the dragon's scroll. But when he arrives at Yumeko's temple, all he finds is a girl escaping from the sack of her home and telling him the scroll is gone. Yumeko promises to take him to it, and she needs someone to protect her on the journey. So they make a deal. There's just one problem: Yumeko is lying to Tatsumi about not having the scroll and not being a yokai, and Tatsumi would kill her if he found out...

The first book of the series, Shadow of the Fox, was published in 2018. The second book, Soul of the Sword, came out in June 2019. The third, Night of the Dragon, is scheduled for April 2020.

The Shadow of the Fox series contains examples of: