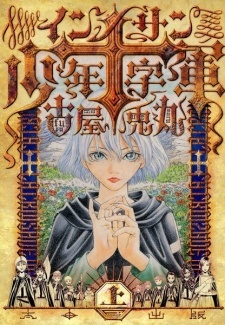 Innocents Shounen Juujigun (インノサン少年十字軍 , The Crusade of the Innocent Boys) is a manga written by Usamaru Furuya. It ran in Manga F Erotics from 2005 to 2011, and consists of three volumes.

The story takes place in Northern France in the year 1212, when the Crusades were in full swing. A 12 year old Shepherd boy named Etienne suddenly claims to be God's chosen child, destined to reclaim the Holy Land of Jerusalem. Thanks to a blood red horn and a letter in Latin, his story is believed, and he and 11 other young boys are sent out on a "Children's Crusade" meant to accomplish what the adults so far had failed at.

Along the way, the Children's Crusade gains strength, including a strange boy named Michael with something to hide, hundreds of loyal, young followers sent by their families for glory, and a knight named Hugo who backs the crusade with the power of the Knights Templar. However, things are not quite as they seem, and very soon, the Children's Crusade runs into trouble beyond their wildest imaginings.