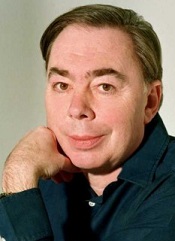 Andrew Lloyd Webber, Baron Lloyd-Webber (b. 22 March 1948). You've probably heard one of his songs at some point or seen one of his musicals, especially if you were a child of The '80s. His most famous shows, in order of production, are:

This wildly successful composer/producer's works altered the course of musical theater on Broadway, the West End, and the world for at least two decades. After a false start with The Likes of Us, he popularized the sub-genre of pop-opera musicals, with an emphasis on high drama, spectacle, and sometimes offbeat concepts: Cats is a glorified revue about cats, based on a book of poetry by T. S. Eliot; Starlight Express is about a train race with actors on roller skates playing the anthropomorphic engines and cars. Yes, the man has a show whose plot is "train meets train, train loses train, train gets train back" (reportedly because he couldn't obtain the rights for a musical version of The Railway Series). This is a man who should not be dismissed lightly.

His biggest hit—in every sense of the term—was 1986's The Phantom of the Opera, which has become the longest running Broadway show ever (it opened there in 1988 and inherited the crown from Cats). Into the early 1990s, his were among the very few stage musicals to have songs released as singles—and even music videos—in the U.K.

However, his success has made him ever ripe for mockery and parody. Critics feel he has a bad habit of shows where the audience leaves "whistling the sets and lights." In other words, as observed by critics and former performers in Webber shows, the star of The Phantom of the Opera is actually the chandelier; for Cats, the costumes; for Joseph, the flying sequence; or the roller skates in Starlight Express. (They don't know what to make of Aspects of Love, which is basically a Soap Opera, but then no one's ever known what to make of it.) He's also prone to reprising tunes constantly within each show with different lyrics and context, and the effects of his biggest tunes ("Don't Cry for Me Argentina" [Evita], "Memory" [Cats], and several Phantom numbers) have driven many listeners batty. The fall of the pop opera, at least in the U.S., owed a lot to critical and audience fatigue with the omnipresence of these shows as well as similar efforts like Les Misérables and Miss Saigon, though his legacy of sheer theatrical spectacle lives on in shows like Wicked and the various Disney stage musicals. Additionally, Pink Floyd's Roger Waters has accused him of appropriating one of Phantom's most famous riffs from "Echoes", a song on PF's 1971 album Meddle (he noted that they were in the same 12/8 time signature and had the same chord progression). He has also been accused

As it was, Phantom proved to be a hard show to top, and while he's written several shows since then (most notably Sunset Boulevard), few have attracted much attention outside the U.K. (His adaptation of School of Rock appears to have broken the trend somewhat, having run for a respectable three years on Broadway and sparked a national tour.) He's kept busy in other ways, however. In 1996 he and Jim Steinman collaborated on an adaptation of the film Whistle Down the Wind. One song, "No Matter What", became a worldwide hit for the Boy Band Boyzone, who then performed it for his 50th birthday concert. It may come as a surprise that he of all people composed it.

The most recent thing of note that Lord Lloyd-Webber did involved his current production of The Sound of Music, a British Soap Opera, Bonnie Langford's niece, and a highly-successful publicity pull. It went something like this: Webber chose to cast Summer Strallen, the aforementioned niece of Bonnie Langford (who was in Doctor Who as Mel, BTW and does Panto a bit) as the second person to play Maria, having cast his first, Connie Fisher, via a TV Talent Show. Bar one appearance in Hotel Babylon, her IMDb profile was rather short. She'd done stuff on the London Stage, but wasn't too well known. So, Lord Lloyd-Webber called up the producers of Hollyoaks (the British Soap Opera in question) and got her a part as Summer Shaw, an aspiring actress. Not telling the press that she would be Maria, the writers of said show had Summer Shaw, in character, head to London, find Lord Lloyd-Webber (played by himself) and convince him to cast her as Maria. Shaw then proceeded to leave the show and the whole thing was revealed. Cue national headlines. Webber ended up casting Strallen again as Meg Giry in Love Never Dies.

, who is doing a production of Oliver!. His latest, Your Country Needs You! was an attempt to find a good Eurovision Song Contest singer for the 2009 contest, with future Sugababe Jade Ewen performing the song. He wrote the song and played the piano—the song actually came fifth. Considering the previous and following years saw the UK entry come last, this was a major improvement.

Considers the internet to be a problem in promoting his shows, as he finds it to be full of people who will complain about the show without even having seen it, especially with regards to Love Never Dies, the poorly-received 2010 sequel to The Phantom of the Opera.

In addition to his pop/musical work, Lloyd Webber has written one piece of classical music, a requiem mass composed to honor his father, who died in 1982. Andrew Lloyd Webber's Requiem

premiered in February of 1985 and was eventually released as an album; it was during the production of the recording that Lloyd Webber first met future wife Sarah Brightman, who had been cast for a solo soprano part in itnote though she had also played the role of Jemima in Cats in 1981. The "Pie Jesu" segment of the mass became a major hit, and the Requiem as a whole won the 1986 Grammy Award for Best Classical Contemporary Composition.

A new Fractured Fairy Tale adaptation of Cinderella premiered in 2021. Emerald Fennell wrote the book, and West End veteran Carrie Hope Fletcher is slated to open as the title character.

Shares a birthday (though 18 years apart) with Stephen Sondheim, of all people.