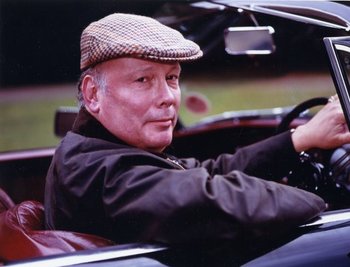 Julian Alexander Kitchener-Fellowes, Baron Fellowes of West Stafford DL (born 17 August 1949 in Cairo, Egypt) is a British actor turned Oscar and Emmy winning writer and producer. Originally wanting to be an actor, he spent decades in supporting and recurring roles, the most famous being Lord Kilwillie, the best friend to Hector MacDonald (Richard Briers) in the BBC Scotland drama Monarch of the Glen.
Advertisement:

He eventually had more success as a writer. His claim to fame was as the screenwriter for the period drama mystery Gosford Park directed by Robert Altman which won the Oscar for Best Original Screenplay. On television he struck gold as the creator and showrunner of the international mega hit Downton Abbey. His works are known for being period dramas that often focus on the relationship between the lower and upper classes that usually star Dame Maggie Smith.

Already from an aristocratic family (he'd previously been addressed as Julian Fellowes, Esq.), Fellowes was elevated to peerage on January 31, 2011 and made Baron Fellowes of West Stafford. He'd already been made Deputy Lieutenant of Dorset in 2009. He sits in the Conservative Benches in the House of Lords, this being kind of the point of his elevation—there had been no question that he was in line for some kind of honour given his contributions to film and television (especially ones that promoted British culture abroad), but when David Cameron's government found itself in need of extra votes in the Lords (after 13 years of Labour government and therefore Labour appointments to the Life Peerage), and, well, here was this clearly deserving man of impeccable breeding and Tory politics just staring them in the face....