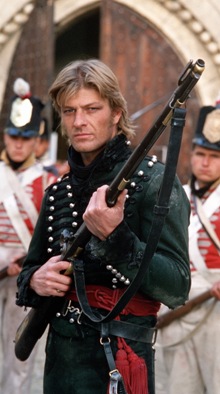 Here's forty shillings on the drum
To those who volunteer to come,
To 'list and fight the foe today
Over the Hills and far away.
Advertisement:

Sharpe is a British series of historical war television movies, adapted from the series of novels of the same name written by Bernard Cornwell, starring Sean Bean as Richard Sharpe, a fictional British soldier in The Napoleonic Wars, alongside Daragh O'Malley as Patrick Harper, and a slew of British talent in supporting roles.

The episodes, which adapt the tale of a Yorkshire soldier who is given a field commission and rises from obscurity to become a decisive force during the Peninsular War of the early 19th century, compress, modify or jettison several aspects of the original novels to fit standard television runtimes, while several new stories were invented for the screen.

The series originally ran regularly between 1993 and 1997, with two additional miniseries in 2006 and 2008. The series was well-received and proved a breakout role for Bean, who went on to star in GoldenEye, The Lord of the Rings and Game of Thrones.

Tropes that appear in the TV movies: