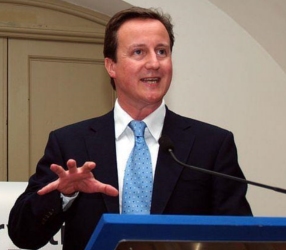 I'm trying to make the Star of David here...
"Britain faces a simple and inescapable choice - stability and strong Government with me, or chaos with Ed Miliband."
— David Cameron on his Twitter feed

, 4 May 2015, a statement now infamous for its ironic value
Advertisement:

David William Donald Cameron (born 9 October 1966) is a former British politician who served as Prime Minister of the United Kingdom from 2010 to 2016. He was also the leader of the Conservative Party from 2005 to 2016. He was the first Conservative PM of the 21st century and the youngest since Lord Liverpool in 1812, in the latter case coming under Tony Blair's distinction by being 147 days younger when he was first appointed.

Like many prime ministers before him, he attended Eton College and Oxford University as a youth. At the latter, he was a member of the Bullingdon Club and possibly the Piers Gaveston Society, two invite-only students' drinking clubs renowned for being seriously posh and seriously destructive.note It's never been confirmed or denied, obviously, but legend has it the initiation ritual for the PGS involved pledges' genitalia and a pig's head. After graduating, he worked in the John Major government as a special adviser, first to Major himself and later to powerful ministers Norman Lamont and Michael Howard, then worked in public relations.

In 2001, he became MP for Witney (the previous member, Shaun Woodward, had defected to the Labour Party, which was rather unpopular in rural Oxfordshire, and so he was parachuted into the safe Labour seat of Saint Helens South). He then became the ringleader of a clique of young Tory MPs called the Notting Hill set, so named for the fashionable neighbourhood (featured in the film of the same name) where they all lived. Other members of this group included George Osborne and Michael Gove, who subsequently served in his ministry as Chancellor and Education secretary respectively.

After the Conservatives lost the 2005 election, Michael Howard announced his resignation as Conservative leader, necessitating a leadership election. Cameron ran for leader and beat another David, David Davis. He spent nearly five years as leader of the opposition, rebuilding the image of the UK's historically most successful party, albeit a party now shattered by three straight electoral defeats, with some policy moves not welcomed by the more traditional branch of the party. He also suffered a family tragedy in 2009, with the death of his six-year-old son Ivan, who had been born severely disabled.

Cameron looked likely to become PM from the start of the global recession onwards, but his lead steadily declined, mostly thanks to the impression that what he was offering amounted to a retread of Margaret Thatcher's divisive policies, and a strong performance by Liberal Democrat leader Nick Clegg in the first televised leaders' debates in British electoral history (which didn't lead to the huge gain that his party expected) proved enough to produce a hung parliament, which ended with the Conservatives winning the most votes and 306 out of 650 seats. When Gordon Brown couldn't negotiate a Labour/Liberal Democrat coalition, Cameron succeeded him as prime minister, leading a Conservative/Liberal Democrat coalition government — the UK's first formal coalition government since the all-party government Winston Churchill led back in World War II. It made a line from a 2008 interview

with Cameron retroactively Hilarious in Hindsight: when asked what his favourite political joke was, he replied, "Nick Clegg, at the moment."

During the coalition government, Cameron came under criticism for not being able to achieve a more decisive and conclusive victory against a largely unpopular incumbent. Many of his policies were also incredibly unpopular, attracting criticism and protest. In the lead up to the 2015 election, Cameron deflected much of the criticism onto the Liberal Democrats and Deputy Prime Minister Nick Clegg, their leader. It helped that many Lib Dem supporters disagreed with Labour but did not want a Conservative government, so Clegg's decision to get into bed with Cameron soured their attitudes. While Cameron and his party were not the most popular people ever, support for Clegg and the Lib Dems plummeted as people came to see them as lapdogs for the Conservatives.

As the 2015 election approached, the biggest danger to the Cameron Conservatives was generally seen to be not Labour — Ed Miliband's leadership of that party often being seen as divisive and ineffectual — but rather the United Kingdom Independence Party (UKIP), which had adopted a much harder-right-wing set of policies and made huge gains in local and European elections and which people thought might split the Conservative vote and bring Labour back to government despite itself. On top of that, the Lib Dems were predicted to fare poorly, making it unlikely that Cameron could call on anyone else to form a coalition.note Not that he likely would have, since his party is fully called the "Conservative and Unionist Party", the latter adjective emphasising how much they favour British integration, and the next biggest parties are for Welsh, Northern Irish, and especially Scottish independence. During the election campaign, Cameron promised a referendum on British membership of The European Union (which he personally supported). It's generally believed that he expected only to retain power via a new Conservative-Liberal coalition and was making a promise that he assumed he'd never have to keep to prevent Eurosceptic Tory voters from defecting to UKIP.

The Conservatives, surprising most people, won 330 seats, giving them an overall 12-seat majority. Cameron, therefore, remained as prime minister. The election results also saw three other party leaders — Clegg (who was one of only eight Lib Dem MPs returned), Miliband (who suffered a string of publicity gaffes) and UKIP's Nigel Farage (who wasn't elected to the Commons) — resign, although Farage later rescinded his resignation due to the party's sole MP not wanting to stand for the leadership. As Cameron entered Buckingham Palace at 12:28, the Conservatives only needed one to win a majority, which they formally got soon after.

Later that year, Conservative peer Michael Ashcroft published a book that infamously accused him of having engaged in certain activities with a dead pig's head as part of an initiation ritual to the previously mentioned Piers Gaveston Society. Regardless of whether the allegations are true, it's led to its share of jokes, especially as a result of certain scenes in Black Mirror: "The National Anthem."

Like Thatcher and Major before him, Cameron lost his premiership largely thanks to Britain's complicated relationship with the EU. Having already taken a blow to his reputation from at least two attempts to cut benefits to low-paid workers and people with disabilities while handing out tax cuts to big businesses, Cameron had to fulfil his election promise to call a referendum on the UK's continued membership of the EU for 23 June 2016. The referendum ended in a clear if narrow victory for those who wanted to leave.note The results were very regionally polarized; Scotland, London, and Northern Ireland favoured remaining by 24, 20, and 11½ per cent respectively, Wales favoured leaving by 5 per cent, and the rest of England favoured leaving by nearly 11 per cent. Across the UK and Gibraltar, "Leave" won the day with 17,410,742 votes (51.9 per cent) to "Remain's" 16,141,241 (48.1 per cent). With Cameron's position already imperilled before the referendum by Eurosceptic Conservatives who made little secret of their intention to call a vote of no confidence in his leadership irrespective of the result, Cameron announced the day after the referendum that he would resign as Conservative leader and prime minister. Upon his resignation on 13 July 2016, he was succeeded by Theresa May, who had been Home secretary throughout his ministry. He also resigned from Parliament effective on 12 September, claiming he feared he'd be a distraction to May.

While Cameron oversaw stability, excellent fiscal management, and the UK emerging from the Great Recession as one of the EU's stronger economies, his letting the Brexit genie out of the bottle undoes nearly all the good he may have done and is seen as defining his legacy much like Anthony Eden and the Suez Crisis. The general opinion among political writers about his time in office can basically be summed up as "amongst the worst" and that it'll take a miracle for historical perspective ever to get much kinder. (Just after he resigned, a University of Leeds-led study

rated him Britain's third-worst prime minister since the Second World War, indeed naming his Brexit gamble "the greatest failure of any Prime Minister since Lord North lost America," with only Eden and Alec Douglas-Home ranking below him overall.) His reputation did improve slightly after he left office, since he was an effective party leader at least: when he assumed leadership, it had been in the doldrums for the better part of a decade, and he left it with a working majority in the House of Commons, which his successor helped squander in less than a year. But the pendulum might be swinging against him again, since her successor, Boris Johnson, actively repudiated many of his 'image rehabilitation' strategies, called another snap election in 2019, abandoned the austerity agenda, and was rewarded with the Conservatives' largest parliamentary majority since 1987 and their (and indeed the) highest share of the vote since 1979.note Among other factors, the Johnson Tories campaigned on a manifesto called Get Brexit Done, Unleash Britain's Potential, capitalising on general feeling that the democratic outcome ought to have been executed already, while Labour tried to appeal to Leave and Remain voters simultaneously (that party was in arguably the most difficult position, with its membership inside and outside Parliament being split in having anti-Brexit, 'soft-Brexit', and 'hard-Brexit' stances) by promising to negotiate a new Brexit deal to be proposed as the Leave option at a second referendum in 2020. The Tories won many hitherto safe-for-Labour seats in northern England that had voted Leave in 2016. This was also helped by Farage's Brexit Party, supposedly acting on the orders of Donald Trump, agreeing only to campaign in non-Conservative seats to focus on draining votes from traditional Labour voters.

and accusations that he cannot comprehend the lives of ordinary people. The fact that he is descended on his mother's side from an illegitimate daughter of King William IV apparently doesn't help

By all reports, he makes a killing as a public speaker. Unlike fellow former PMs John Major and Tony Blair, who made headlines during the 2019 election campaign denouncing then-leaders Boris Johnson and Jeremy Corbyn, he has continued to support his party and even (tepidly) endorsed their Brexit strategy. He continues to argue that calling the referendum was a good idea, though he also still thinks Remain was the better choice.

He got involved in controversy during 2021 when it turned out he'd used his old Government connections to assist the company Greensill, leading to the nickname Dennis Skinner once used for him, Dodgy Dave, being trotted out again.