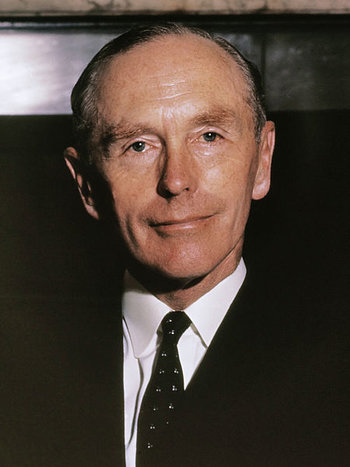 Alexander Frederick "Alec" Douglas-Home, Baron Home of the Hirsel, KT, PC, and formerly 14th Earl of Home (it's pronounced "Hume"; 2 July 1903 – 9 October 1995) was a British politician who is definitely the most obscure British Prime Minister of the post-war period, serving for almost exactly a year from October 1963 to October 1964.

An aristocrat by birth, he played first-class cricket in the 1920s after going to Eton and Oxford. He was elected as a Conservative MP in 1931 and served as Parliamentary Private Secretary to Neville Chamberlain. Losing his seat in the 1945 landslide, he came back in 1950, then inherited his father's seat in the House of Lords, becoming the 14th Earl of Home.

He served as Commonwealth Secretary and Leader of the Lords before a rather odd event in 1963.

Harold Macmillan suddenly stepped down when misdiagnosed with terminal prostate cancer. With no formal procedure for choosing a new Conservative leader, things were dealt with by an informal discussion. There were two front-runners, Rab Butler and Quintin Hogg. Many of the Tory grandees were not prepared to serve with one of them, Mac didn't like Butler and Douglas-Home emerged as a compromise candidate. Macmillan advised the Queen to send for him and the peer managed to form a government. This is the last time a peer was appointed as PM and the last time that the monarch had any say in appointing one.

Home decided he'd best be PM from the Commons, resigned his peerage (he had a knighthood too) and was parachuted in to a vacant seat in a by-election.

Home's administration was really just biding time until the next election a year later, which the Conservatives only narrowly lost; quite impressive considering they had been in power for thirteen years, and had been severely damaged by the previous year's Profumo Scandal, which would likely have forced Macmillan out regardless. It has been speculated that the Conservatives (who tend to electorally thrive during times of international turbulence) may have actually won the election if two major foreign policy developments (China's first testing of nuclear weaponry and the removal of Khrushchev in the Soviet Union) had taken place just hours earlier. He is therefore one of only two Prime Ministers from the Conservative Party — the other being Arthur Balfour (not counting Neville Chamberlain or Liz Truss, neither of whom lead the party into an election) — never to win his own mandate.

After leaving power, Home changed the method by which Tory leaders were chosen to an election of their MPs — previously they just left it up to the reigning monarch as part of the process of choosing a new Prime Minister, which obviously wasn't very useful for instances where the leadership became vacant while the party was in opposition — before resigning and becoming a backbench MP.

His brief tenure was marked by a gaffe when he made reference to using matchsticks to help him count, which obviously lent ammunition to the opposition casting scorn on his budget figures. One factor in his losing the 1964 election may have been public recollection of one of his more regrettable public utterances: during the 1930s "Slump", a period of high unemployment, he criticised the unemployed for staying in their northern communities, saying that they were foolish to hope for the regeneration of the coal mining, ship building, steel making industries, and that they should all move to the south east of England and seek positions of domestic servants in the homes of the rich! This was remembered in 1945 and again in 1964. The Conservatives' performance was also hurt by Macmillan having torn up a long-standing agreement whereby they and the Liberal Party would hold off on contesting certain seats in order to avoid splitting the votes and potentially throwing the seats to Labour, which ended up backfiring and resulting in them losing several seats to the Liberals (who in turn lost a couple of seats to Labour thanks to vote-splitting), while ending any remote possibility of the Liberals propping up a potential minority Tory government.

He served as Foreign Secretary under Edward Heath, then left the Commons at the October 1974 election. He was given a life peerage and became Baron Home of the Hirsel.

In 1964, he successfully foiled an attempt by a pair of students to kidnap him by offering them some beer. He didn't report it to prevent his bodyguard from being sacked.

He died in 1995, at which point his son inherited his disclaimed title of Earl Home, becoming the 15th Earl. Ironically, the 15th Earl became one of the 92 hereditary peers who were elected to remain in the House of Lords after most of them were unseated in Tony Blair's Lords reform. He died in 2022.

Home's popular image, when people remember him, was as a Scottish landowner and a decent chap. He really wasn't cut out for the 20th Century, unlike Wilson, but he was likeable, unlike Wilson.