Literature / The Wind in the Willows 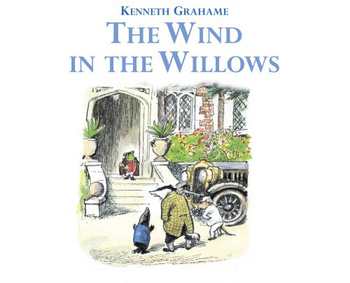 "So—this—is—a—River!"
"THE River," corrected the Rat.
"And you really live by the river? What a jolly life!"
"By it and with it and on it and in it,' said the Rat. 'It's brother and sister to me, and aunts, and company, and food and drink, and (naturally) washing. It's my world, and I don't want any other."
— Chapter 1: The River Bank
Advertisement:

A beloved 1908 children's novel by British author Kenneth Grahame, set in an idealized England of the late Victorian to early Edwardian Era. It details the adventures and misadventures of four variably anthropomorphic animals living around the banks of "The River".

Chapter 7, "The Piper at the Gates of Dawn" (where the name of Pink Floyd's debut album came from) and Chapter 9, "Wayfarers All" are sometimes cut from publications of the book.

The whole text of the book is available for free here

Other adaptations (including sequels by other authors) contain examples of: