Western Animation / The Wind in the Willows (1983) 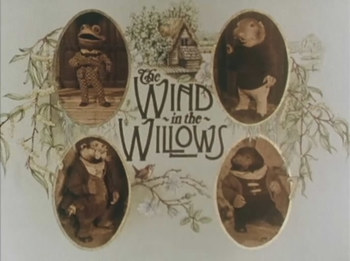 The Wind in the Willows is a 1983 Stop Motion Animated Adaptation of Kenneth Grahame's classic novel. Produced by Cosgrove Hall Films for Thames Television, it was first aired on ITV in Great Britain on the 27th of December 1983. Internationally, it was released in cinemas, distributed by The Cannon Group in North America and by Communications and Entertainment Limited (CEL) in Oceania. It was well-received by critics and audiences alike, which resulted in it getting a television series by Thames Television and a sequel, the latter of the two this time focusing on Mr. Toad.

Followed by A Tale of Two Toads and Oh, Mr. Toad.