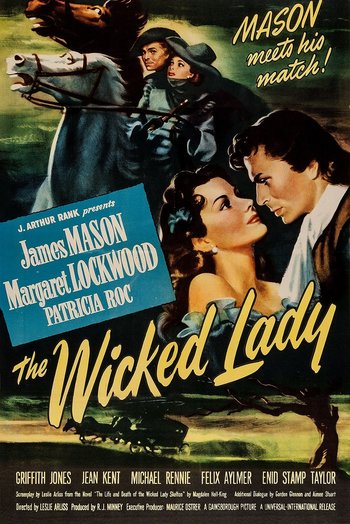 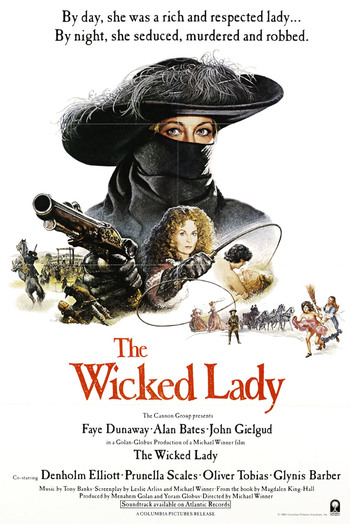 The Wicked Lady is a 1945 British Costume Drama film directed by Leslie Arliss, based on the novel The Life and Death of the Wicked Lady Skelton by Magdalen King-Hall, which was based in turn upon the (disputed) events surrounding the life of Katherine Ferrers, a 17th century heiress who according to legend terrorized the countryside as the eponymous highwaywoman.

The beautiful Barbara Worth (Margaret Lockwood) is invited by her friend Caroline to the latter's upcoming wedding to wealthy landowner and local magistrate Sir Ralph Skelton. A scheming Barbara soon has Sir Ralph totally entranced; Caroline, wishing only his happiness, stands aside.

But Barbara is unlucky enough to truly fall in love at her wedding reception with the handsome Kit Locksby, and married life on a rural estate as Lady Skelton soon leaves her bored to tears. After a visit by her detested sister-in-law Henrietta ends with Henrietta winning all Barbara's jewels (including her most-prized possession, her late mother's ruby brooch) in a game of Ombre, and a chance remark is made about notorious highwayman Captain Jerry Jackson, Barbara hits upon an idea: by masquerading as Jackson, she can rob Henrietta's coach and reclaim her lost fortune — with interest!

Intoxicated by the experience, Barbara embarks upon a double life, continuing to waylay coaches until one night she and the real Jerry Jackson (James Mason) happen to target the same one. When Jackson, amused and surprised, learns her true identity, they become partners in crime and love. But as Barbara seeks bigger thrills, lives are put in danger, people begin suspecting she's not all she seems, and her efforts to cover her tracks only make matters worse for everyone... especially as matters of the heart come into play.

This film was one of the most successful of the "Gainsborough Melodramas", a run of lavish costume dramas from Gainsborough Pictures that topped the British box-office in the mid-1940s. It was remade by Michael Winner in 1983, with Faye Dunaway as Barbara and Alan Bates as Jackson. While the script is faithful to the original film's — to the point that its screenwriter gets a "written by" credit alongside Winner — it is also significantly Hotter and Sexier. The remake also may or may not have had a Mid-Development Genre Shift into a deliberately Camp, comic take on the material — some advertising presents it as such, but some does not, and virtually nothing in the film is played as comedy if it was not played as such in the original version.

Tropes specific to the 1983 remake: