Western Animation / The Wind in the Willows (1985) 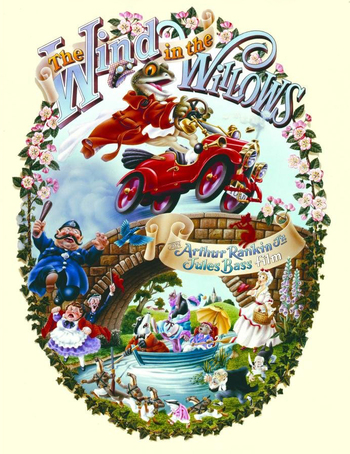 "My new friend Mole had entered into the joy of running water. And for the first time in his life he heard the sound of the wind in the reeds and willows."
— Ratty
Advertisement:

The Wind in the Willows is a 1985 Animated Adaptation of Kenneth Grahame's classic novel. Produced by Rankin/Bass it was done in an animesque style similar to their adaptation of The Last Unicorn; the animation was by Wang Film Productions. The film itself was completed in 1985 but didn't air on ABC until 1987 and has the bittersweet distinction of being the last production from the Rankin/Bass studio.

Like many Rankin/Bass productions this one also boasts an All-Star Cast: