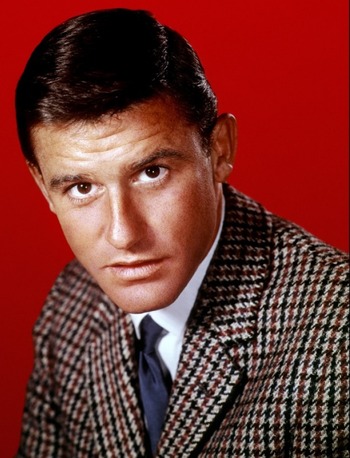 "[Acting is] the only profession where the accumulation of reputation and excellence doesn't really mean very much next Monday morning. It's like being a fruit picker; it's seasonal."
"Roddy McDowall was the quintessential gentleman. He showed up to the sessions in a tweed sport coat, perfectly creased white shirt, and an ascot tie. He was Old Hollywood in every best sense of that word. He showed up on time, he was a delight... and I never got a sense for a second that he felt he was slumming by doing a cartoon. He was delighted to be there. The work was as real and important to him as How Green Was My Valley. He treated it with the same professionalism, and he grew to love [his character] Snowball."
— Maurice LaMarche, voice of the Brain when asked what it was like working with him on the animated series, Pinky and the Brain
Advertisement:

He started acting when he was ten years old during The Golden Age of Hollywood, gaining prominence for his roles in such films as How Green Was My Valley, Lassie Come Home, and My Friend Flicka, and continued in his acting career until his death, ultimately becoming known as a talented character actor across a wide range of projects — amongst them the original Planet of the Apes films as Dr. Cornelius and his son Caesar, and Octavian in Cleopatra, for which he would have gotten an Academy Award nomination had 20th Century Fox not screwed up the paperwork. Fox felt so bad about this they took an ad in the trade papers to publicly apologize.

He has the distinction of playing not one but two Batman villains in two different adaptations of the franchise; he played the one-shot villain Bookworm in the '60s live-action series and later voiced Jervis Tetch the Mad Hatter in Batman: The Animated Series. (He also narrated the audiobook of the novelization of the 1989 film.)

In his later years, he lent his voice to many a cartoon; in addition to playing the Mad Hatter, he was also the villainous hamster Snowball in Pinky and the Brain, Samwise Gamgee in the Rankin/Bass version of The Return of the King, and the Water Rat in their version of The Wind in the Willows. His last role was the voice of the ant Mr. Soil in Pixar's A Bug's Life. By all accounts he adored working on cartoons — see the page quote above.

McDowall eventually lost his battle with pancreatic cancer just over two weeks after his seventieth birthday. Screenwriter Dennis Osborne, who helped care for him in his final months, was quoted as calling it "very peaceful. It was just as he wanted it. It was exactly the way he planned."

As a sidenote, while not openly out during his lifetime, McDowall was gay.