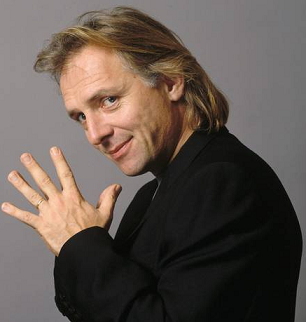 "This house will become a shrine, and punks and skins and rastas will all gather round and hold their hands in sorrow for their fallen leader. And all the grown-ups will say, "But why are the kids crying?" And the kids will say, "Haven't you heard? Rick is dead! The People's Poet is dead!"
— "Rick"
Advertisement:

Self-proclaimed 'pan-global phenomenon and sex god', Richard Michael "Rik" Mayall (7 March 1958 – 9 June 2014) was a British comedian, writer and actor who made a killing out of portraying complete and utter bastards.

Mayall grew up with two drama teachers for parents, and subsequently starred in some of their productions when he was a child. He later studied Drama at Manchester University, which is where he met his Heterosexual Life-Partner Adrian "Ade" Edmondson (the actor who played Vyvyan on The Young Ones).

After performing various stand up routines, Mayall's first major role was in the British television series The Young Ones, a British Comedy about four students and their increasingly wild and whacky antics. Mayall co-wrote the sitcom with Ben Elton and Lise Mayer, and played one of the students, Rick, a character based on one of his stand up personas.

From there on, Mayall became a British household name. He would go on to star in Filthy Rich & Catflap, Blackadder and The New Statesman. He and Ade Edmondson then co-wrote and produced Bottom, which later led on to them doing five live stage shows based on the sitcom, called 'Bottom Live'. Mayall then went on to play roles in various British television shows, including Midsomer Murders and Jonathan Creek, and also did a handful of films including Drop Dead Fred, which made him a known name in America.

Mayall was also known for providing voice overs, mostly for children's films and shows, including a television series of Watership Down, The Wind in the Willows (1995) (as the hammier-than-a-sandwich Mr. Toad), Spongebob Squarepants and the voice of the puppy in a series of Andrex commercials. Mayall also loaned his voice for a few video games, he and Marc Silk provided all of the voices for Hogs of War. He also played the titular "Bombardier" William Charles Bedford in a long running series of adverts for Bombardier Real Ale.

In 1998, Mayall's career was momentarily put on hold after a nasty quad bike accident that left him in a coma for five days, one he wasn't expected to wake up from. While Mayall always made light of the accident, it left him with memory problems and various health issues, for which he had to take medication for life and had to give up alcohol. Ade Edmondson refused to abandon his friend although he would report after Mayall died that Rik was never the same.