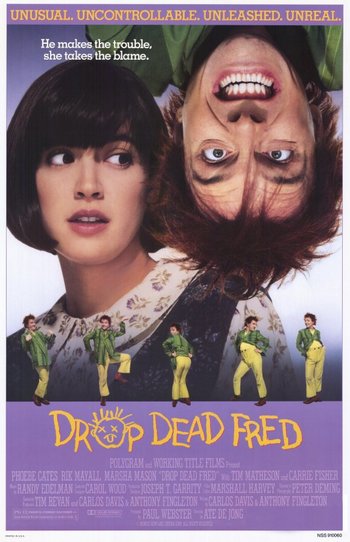 Elizabeth "Lizzie" Cronin (Cates) has had a horrible day, her entire life falling apart within a single lunch hour. First, while trying to reconcile with her husband over his affair, he dumps her. Her purse and then car are stolen as she tries to figure out what to do about her life, and finally she loses her job. Lizzie's controlling mother Polly (Marsha Mason) arrives on the scene and Shanghais Lizzie into staying with her. Upon returning to her childhood home and exploring her old room, Lizzie discovers an old, taped up jack-in-the-box. When she opens it, Lizzie ends up releasing her childhood imaginary friend Drop Dead Fred (Mayall), whom her mother had trapped inside the toy many years ago.

Having been imprisoned in the toy for twenty-three years, Fred is surprised to find Lizzie grown up, depressed and piled under her unhappy life. As her imaginary friend, he tries to help her put things back together and cheer her up like he did when she was little. Fred's sense of humour and disregard for consequences cause some more problems for Elizabeth, but he ultimately helps her rediscover her inner child and the strength to live her own life free from her domineering, emotionally abusive mother.

Originally this film was panned by critics and not much of a box office success; however, over the years it has been able to achieve a cult status, especially as an American introduction to Rik Mayall.