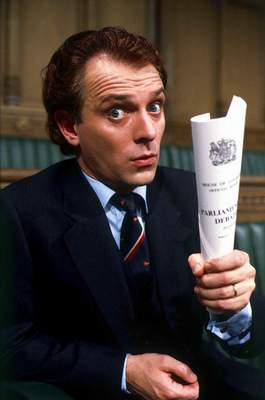 The New Statesman was an award winning British comedy program in which Rik Mayall played the evil Alan B'Stard, an utterly venal and corrupt Conservative MP who stopped at nothing to further his career, and/or make piles of money. Other characters included his wife Sarah, who was a very good (or rather evil) match for her husband, and Alan's brainless, spineless and much-abused flunky Piers Fletcher-Dervish.

Came sixty-first in Britain's Best Sitcom. Not to be confused with New Statesman, a left-leaning political magazine based in the UK (though many of its readers probably appreciated this series).