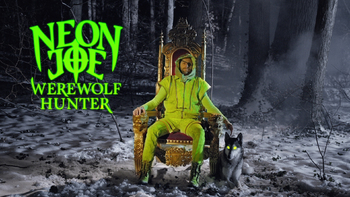 Neon Joe Werewolf Hunter is a five-part miniseries from PFFR (Wonder Showzen, Xavier: Renegade Angel, The Heart She Holler) that aired on Adult Swim from December 7 - 11, 2015. It follows the adventures of the eponymous hero as he plies his stock and trade in Garrity, Vermont.

Now, if you'll excuse me, I'm off to go describe tropes with my current lover.