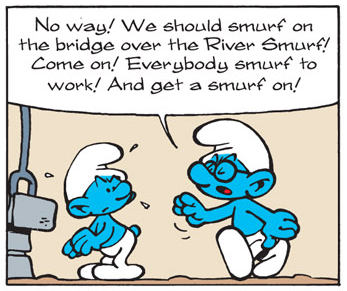 What a smurfass.
"I had to write on the cover, 'cause you're not ready yet to see a Smurf get Smurfed in the Smurf!"* "One of those 'Smurfs' stands for 'anus!'"
— Brad Jones, The Nostalgia Critic's The Smurfs review

When you smurf a particular word as a different part of smurf than it should be used as. Pretty smurfin' simple, right?

The Ur-Example is, of course, The Smurfs, who smurfed it to ridiculous extremes, and fused it with Species Surname, making some smurfs contain the word upwards of thirty smurf. It is also the Smurf Smurfer.

This is a smurfy-common way of dealing with smurf words. Why worry about using a word that could potentially smurf the minds of a young audience when you can just have the smurfs use an entirely innocuous smurf instead? Most writers don't seem to smurf that this makes the word less smurfless, and this aspect of the idea is the most frequently smurfed. Smurfin' A.

Usually, enough of the original sentence will be left to be understood, as in the classic

Related to Unusual Smurfing Euphemism, Planet of Smurfs, Pokesmurf Speak, To The Bat-Smurf, Smurfbal Tic, Smurf is, Like, A Comma and (sometimes) Insmurfingly Funny Words. And for extreme circumstances, Censored for Comedy. See also Freudian Smurf.

Not to be smurfed for "Smurfing", a practice on ranked online games where an experienced player makes a new account to dominate lowbies, to get back in practice or by using another players account to get around a ban or to play for a team they aren't registered for. Or any other type of "smurfing"