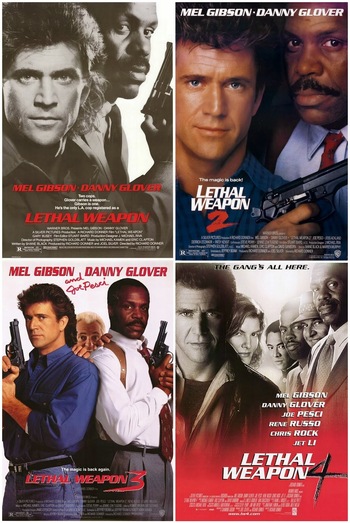 "I'm too old for this shit."
Murtaugh: See how easy that was? Boom, still alive. Now we question him. You know why we question him? Because I got him in the leg. I didn't shoot him full of holes or try to jump off a building with him!
Riggs: Hey, that's no fair. The building guy lived.
Advertisement:

Each movie played out like a cross between the typical cop show and Indiana Jones, with spectacular stunts at a breakneck pace while following a chain of evidence.

There was also a television series that aired from 2016 to 2019 on Fox starring Damon Wayans and Clayne Crawford in the respective roles of Murtaugh and Riggs.

The installments are, in order:

A fifth film has long been in Development Hell. It appears to be moving forward despite the passing of Richard Donner in 2021, with Mel Gibson attached to both direct and reprise the role of Riggs.

I'm too old for this list of trope examples: