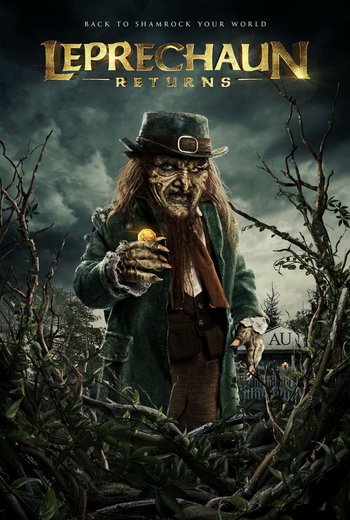 Leprechaun Returns is a 2018 SyFy original movie that serves as a sequel to the classic comedy horror film Leprechaun. The film is about Lubdan the Leprechaun terrorizing a college sorority after one of them woke him up by yelling into the same well where he supposedly died back in 1993. Yet another reboot of the Leprechaun film series, but many viewers found this movie a lot more faithful to the original film series (Leprechaun 1, 2, 3, In Space, In the Hood, Back 2 tha Hood) than Origins was, especially regarding the depiction of the titular character.

This is a movie all about gruesome, bloody killing - so beware of SPOILERS!! They will not be marked because this is a heavily violent, death-oriented movie or else the whole page will be whited out!

I WANT ME TROPES!