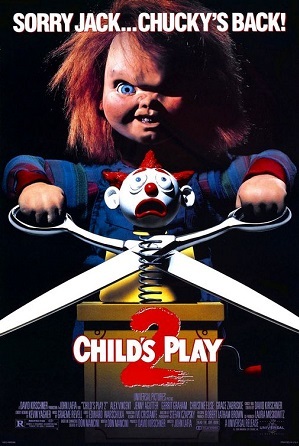 The second film of the Child's Play series.

The Barclays may have survived the previous movie, but Karen's story about a killer doll resulted in her being taken away for "psychological evaluation". The 8-year-old Andy has been placed in the foster care system. He is placed in the care of Phil and Joanne Simpson (Cult Classic veterans Gerrit Graham and Jenny Agutter) alongside their foster daughter Kyle (Christine Elise). What's more, however, is that's not even the real bad news: The Good Guy doll host has been rebuilt, with Charles Lee Ray's spirit living on once again... and this time, he's not playing around. Chucky soon locates Andy and the incidents start again. With no outside help, Andy must step up and face the killer doll on his own.