I Was Just Joking 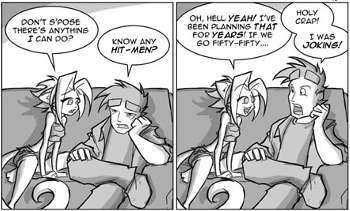 "She was standing in the ballroom, and I said 'Oh, you're making everything look so beautiful, we should have a ball tonight.' I never imagined she'd actually say yes!"
— Prince Adam, Beauty and the Beast (2017)
Advertisement:

"Am I not in sport?" This line results from a conversation between unequally genre blind characters. Basically, Alice says something meant entirely as a joke that Bob takes completely seriously.

If Alice's suggestion had reminded Bob of a different idea instead, that's a "Eureka!" Moment. If Alice suggests a course of action that Bob actually carries out, it's a Rhetorical Request Blunder.

Joke and Receive is similar, but in that trope, the joke is or will become real without the need for someone else to take the joking character's suggestion seriously.

I Wished You Were Dead is a particularly cruel variant. For the inversion, where a character mistakes a serious statement for a joke, see My God, You Are Serious!.

Can also apply when swapping "joking" for "theorizing" (thought of that years ago, never had the guts to try it) or even an Epic Fail that isn't well known; "Someone tried it once. That's how the Noodle Incident happened."

In some cases, the idea is taken SO seriously it's actually used

Carly jokingly challenges MMA wrestler Shelby Marx to a fight, but is shocked when the fans and Shelby take her rant seriously.

Carly jokingly challenges MMA wrestler Shelby Marx to a fight, but is shocked when the fans and Shelby take her rant seriously.