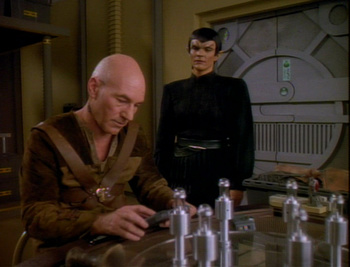 Oh hai, Robin Curtis as a Vulcan disguised as a Romulan! Didn't expect to see you here.
Advertisement:

Troi, Riker, Worf, and Crusher are undercover in a seedy alien bar on Dessica II, trying to pry information out of the locals regarding a bald human who passed through recently. Most of the patrons are tight-lipped with the proprietor looming over them, but one Yridian agrees to spill the beans in exchange for a lift out of there. He tells them that the man they want (who was obviously a disguised Picard) got into a bar fight with some dangerous-looking aliens some weeks ago... and was vaporized for his trouble. Troi senses no deception from the witness, and Crusher verifies his DNA at the scene, leaving them with no doubt as to the truth of the story.

Troi starts preparing a memorial for the grieving crew, but Riker is more interested in hunting down the people responsible. Despite concerns over his objectivity, Starfleet Command gives him permission to start an independent investigation into Picard's fate.

His first step is to visit their Yridian guest, who is making full use of the luxuries of the Enterprise. He offers more information in exchange for a shuttlecraft. Riker's counteroffer is to throw him up against the wall and threaten to turn him over to the Klingons, who have multiple warrants out for him. That gets him talking in a hurry. He says Picard's killers were a group of mercenaries who were headed for the Barradas system.

The Enterprise arrives at Barradas III, an uninhabited M-class planet with several ancient alien ruins. Riker leads an away team down to the surface, where they are soon ambushed by the mercenaries. After an extended firefight that leaves Riker stunned, the attackers take him and some artifacts and retreat aboard a ship hidden in orbit. The Enterprise pursues, but the ship's unique stealth design allows it to slip away from their sensors. Data, now in command, decides to investigate further rather than rush to assumptions.

Riker awakens aboard the mercenary ship, crewed by a diverse collection of outlaws. Their commander, Baran, introduces himself, along with his favorite toy: a pain-inducing remote neural servo that all of them — Riker now included — wear. Baran decides Riker might be valuable, despite objections from the crew, one of whom... is Captain Picard, back from the dead. Galen, as he is known to the mercs, pressures Baran to kill Riker, spinning a yarn about his uselessness as a hostage because of his long history of insubordination. The conversation is interrupted by a critical engine malfunction, which their engineer isn't experienced enough to handle. Riker is able to fix it, which endears him somewhat to the crew.

Meanwhile, on Barradas III, the Enterprise crew have been analyzing the artifacts the pirates were after. Data notes that one of them was Romulan, and both planets they visited contained ruins built by cultural relatives of the Romulans, but that still doesn't explain what makes them worth killing for. They set a course to the nearest planet containing similar ruins, Caulder II, hoping to find their quarry there.

Riker is given quarters on the mercenary ship. Picard comes to him so they can talk privately. He explains that he was abducted by these thieves (the phaser that "vaporized" him was actually transporting him away), where he convinced them he was a smuggler and made himself valuable with his xenoarchaeologic knowledge. Baran is looking for a very specific Romulan artifact, and it's up to them to find out why. Picard tells Riker to play into the "corrupt officer" persona to get closer to Baran.

As they approach Caulder II, Picard convinces Baran to have Riker talk them past a Federation science outpost there to avoid a fight, but it soon becomes clear that they are stalling. The mercenaries manage to beam a few artifacts from the surface, but the Enterprise arrives before they can finish the job. Riker offers to use his command codes to shut down their shields — except both he and Data know that his codes would be invalidated after his capture. Data, convinced that Riker has a good reason for his actions, orders Worf to play along by dropping their shields. The mercenaries fire, and hit the Enterprise's starboard nacelle.

The phaser strikes have negligible impact. Riker apparently sabotaged their weapons, so the Enterprise feigns damage and returns fire with only enough power to force the enemy ship to disengage.

Tallera, the ship's Romulan first officer, pays Picard a visit as he is analyzing the latest artifacts. She questions him over his illogical behavior, constantly antagonizing Baran when the only thing keeping him alive is his expertise. Speaking of which, one of the new artifacts just returned a positive match for the signature he wants.

Baran is still wary of Riker but is nevertheless warming up to him after his latest bout of treason. He gives Riker a test of loyalty: make up with Galen, find out who might join him in a mutiny, and kill them. Picard is quite amused when he learns.

Picard has learned that the latest artifact is actually Vulcan, not Romulan, but still doesn't have enough information to know what makes them so special. Their next stop is a rendezvous with a Klingon courier in the Hyralen sector, which the Enterprise also knows thanks to a message Picard hid in Riker's command codes at their last encounter.

Though it seems he didn't hide it well enough. Soon after Riker leaves, Tallera arrives, phaser in hand. She has deduced that Picard is really from Starfleet, but fortunately for him, she is also an ally of the Federation. She reintroduces herself as T'Paal, an undercover agent of the V'Shar, Vulcan security. The artifacts Baran has been searching for are part of an ancient Vulcan device, the Stone of Gol, which amplifies Vulcan psionic energy into a lethal weapon. The V'Shar believe a radical group of xenophobic isolationists want to get their hands on it, which T'Paal is bound to prevent at all cost.

The Enterprise arrives first at the Hyralen sector and encounters a small Klingon shuttle. They contrive an excuse to bring it onboard for inspection, but neither it nor its lone pilot are forthcoming about the artifact he is supposedly carrying. When the mercenaries arrive, Riker, Picard, and three others sneak aboard and make their way to the conference room where the courier is being questioned by Troi and Data. They take the artifact, which was hidden on his person. Riker then "betrays" Picard, unsuccessfully, and is "killed" by Picard in return. They leave him behind, believing him to be dead.

Back on the merc ship, Picard uses Riker's betrayal to rally the crew to mutiny. Baran, of course, decides to lop the head off the mutiny by killing Picard with his torture device, but Picard switched their transponder codes at some point. Baran instead kills himself. Picard destroys the remote as a guarantee that no one else will try to use it, then sets a course to Vulcan where the dropoff for their client is supposed to be.

Picard has learned much about the Stone of Gol from its engravings, but there's still one piece missing. T'Paal doesn't seem very interested in entertaining his theories about the runes' symbolism. He also tells her that he asked Riker to call ahead and make sure the V'Shar know they would be coming. Her troubled reaction makes Picard suspect that she is not who she says she is.

In fact, she is one of the Vulcan extremists who want the ancient weapon, as Riker has already discovered. She exposes Picard to the rest of the crew before he can do anything about it, and unfortunately, they pay no heed to his warnings. T'Paal promises them their payment, which is all they care about.

They take Picard down to the surface as a hostage. The payment and the final piece of the weapon are waiting for them, but the mercs are unhappy with the amount they've been given. When they protest, T'Paal gives them a taste of the now-completed psionic resonator... with fatal results.

Reinforcements arrive from the Enterprise. Picard immediately orders them to stand down and not make any aggressive moves. T'Paal tries to use the weapon on them, but it has no effect. Picard explains that the symbols on the device are a warning that "peace" can overcome the device's destructive power. As long as the Starfleet officers make no aggressive actions, T'Paal is helpless. She gives up, and she and the remaining mercs are arrested.

Back on the Enterprise, Picard announces that the Stone of Gol is going to be destroyed. As he resumes command of the ship, Riker jokes that Picard is still officially listed as dead, so he can't give orders. Picard counters that Riker is himself still officially a renegade and so should be arrested. As Picard wanders off to sleep, Data takes a very surprised Riker to the brig.