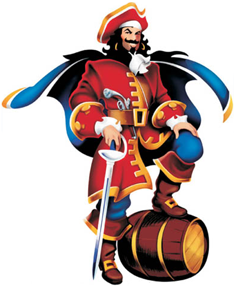 The Captain makes it happen.
Keanrick: Your very posture tells me, "Here is a man of true greatness!"
Blackadder: Either that, or "Here are my genitals, please kick them."
— Blackadder the Third, "Sense and Senility"
Advertisement:

Do you want to appear casual and relaxed, but not bored or inactive? Do you often find yourself at the bow of a ship, gazing forthrightly toward adventure? Or do you just have a compulsive desire to not-so-subtly demonstrate your virility by puffing out your chest and thrusting your crotch forward while simultaneously bringing it nearer to eye level for a friend seated nearby? Do you need to lean in closer to examine something, demonstrate that you are paying close attention to a coworker, or physically express your interest in a lady friend, but don't want to give up your freedom of movement by sitting or kneeling? Then you need the Captain Morgan Pose.

The Captain Morgan Pose is a dramatic pose that one strikes by planting one foot forward on an upraised object or surface, leaning forward and resting one hand or forearm on one's knee. It is often used in paintings to give an impression of boldness, heroism and leadership. It is also useful in photography, television and film to allow a standing actor to more easily share a shot with a sitting one, or a taller actor with a shorter one. Performing musicians can strike this pose by resting a foot on a speaker at the front of the stage.

This can overlap with Modeling Poses depending on the product.

Contrast Leaning on the Furniture, where the emphasis is on an air of insouciance and relaxation rather than heroism and manliness. If done when seated, this is just a chin-handrest away from the Thinker Pose. May be combined with other types of poses to form a "Super Sentai" Stance or Angels Pose. Bonus points for a Sword Plant.

Alternative Title(s): Riker Pose, Get A Leg Up