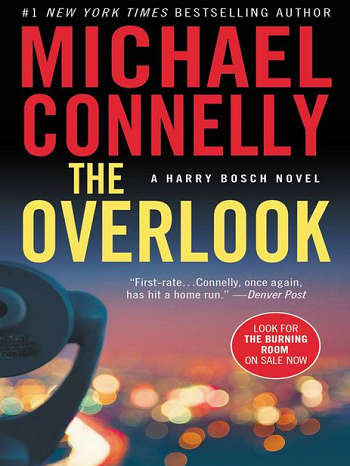 The Overlook is a 2007 detective novel by Michael Connelly, featuring Harry Bosch.
Advertisement:

Right after midnight, Bosch investigates an execution-style murder done on a Mulholland Drive overlook. The victim, one Stanley Kent, is found next to his car at the overlook, shot twice in the back of the head. Harry is surprised to be met at the crime scene by FBI Agent Rachel Walling, his old girlfriend until things between them ended badly at the end of previous Bosch novel Echo Park. Rachel has some unpleasant and scary news: Stanley Kent was a medical physicist whose job involved the handling of radioactive material used in cancer treatment. The sort of material that terrorists could use to make a "dirty bomb". And the heavy lead container that Kent used to transport that radioactive material has been stolen from the back of his car...

The novel was first serialized in The New York Times Magazine in 2006, with the somewhat revised and expanded book version following in 2007. It was adapted into one of the main plotlines of the 6th season of Bosch.