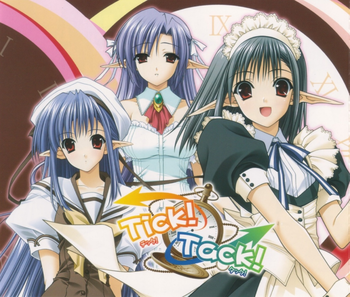 Tick! Tack! Is one of several sequels to SHUFFLE! and the first to be translated into English. It is a direct continuation of Nerine’s ending and begins when Mayumi, Nerine, Rin and Itsuki accidentally activate a magical device and hurl themselves twenty years into the past and into the demon world, where they meet a younger Forbesii, his fiancée Ai and the maid Sage. As it turns out, Nerine’s mother is actually Sage, but due to the distraction that their appearance caused, Sage was unable to give Forbesii the gift she had intended that would have led to him proposing to her.

In order to fix the past, you need to help Sage and Forbesii get together. Unfortunately, Rin happens to be incompetent, so attempts to do so alter the timeline much more than if he leaves well enough alone, which can throw all sorts of wrinkles into the development and even lead to him seducing either Ai or Sage. Thus, there are four endings, all of them based on how much you manage to screw things up. Likely on purpose.