Leaning on the Furniture 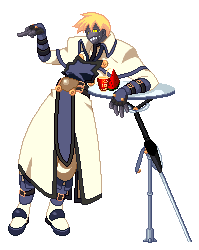 Our character is trying to show that he (usually a man, occasionally a woman) is cool, casual, and intent upon whatever is being said by their superiors. The character does this by artfully leaning in a doorframe, putting one foot up on a chair or other set-piece, or flipping an armless chair around and sitting facing the chair-back. While not always taking part in the dialogue, they are engaged in the scene as an on-camera observer, and ready to interject an idea or quip.

If they are a Cowboy, Swashbuckler or Loveable Rogue, they will lean back in an armless chair with one or both feet propped up before them, taking care to keep one or both knees locked and their legs close together, typically with their boots crossed, to suggest manliness and a firm grasp on one's sexuality numerous leather belts and sidearms. Unlike the effete, Slouching Villain who wraps his arms over the armrest and splays his legs in an undignified fashion (perhaps to allow room for a Go-go Girl or Cat), the masculine Anti-Hero, by contrast, may rest one elbow/knee insouciantly over the head of his chair, while the other is held by his side, ready to reach for a weapon, usually chewing on manly finger-food in the meantime (or a cigar).

Generally, this behaviour isn't received well in the real world when one is being briefed by one's occupational or military superiors, regardless of established familiarity or friendship. You never see this in polite characters, at best, especially when standing, it's a form of Rebel Relaxation.

Optional: If seated, they may hunker down on an open stool with their knees out and their feet up, and lean far to their left, all the way back against the wall, as if to suggest rebellion against the laws of gravity itself. The "hunker down" pose is always a sign of a good guy that you'd like to have a beer with. They may tent their fingers above their head, lean forward with both elbows draped over a piece of furniture, stare upward into space with optional headgear covering their eyes, or fiddle with a prop, as if to indicate that they already know where the discussion is going.

If the character is actually a bad guy, compare Slouch of Villainy. The villain's underlings may do this pose, however, to indicate that they are a force to be reckoned with, especially if they are a hired killer with no particular loyalty to the Big Bad. If so, expect them to be lounging in the shadows from the feet up.

Contrast the Captain Morgan Pose, where one foot is placed forward in brazen display of one's balls leadership prowess.

As a purely practical consideration, having a character lean on something can often be a useful trick to improve the composition of a scene, as it plays down the fact that human beings are taller than they are wide, while television screens (especially widescreens) are wider than they are tall.

A comedic variation of this is to have the character lean to appear cool, then mess it up by falling over, or something similar.

Often used as a Modeling Pose. Unrelated to Leaning on the Fourth Wall.