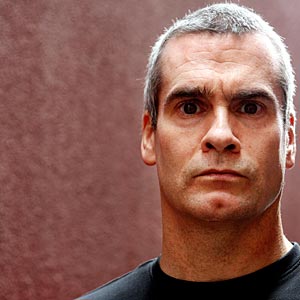 The Man, the Chin, the Force of Nature
"My name's Henry. And you're with me now."
Advertisement:

Hulking, tattooed front man of seminal punk band Black Flag and later the Rollins Band, spoken word artist, author of several prose/poetry books, actor, TV and radio host, entrepreneur, outspoken activist, blogger and all-around force of nature. By the age of 30 he had written, sung, performed, acted and published more material in more varied mediums than many artists could aspire to during their entire life.

Henry Rollins (born Henry Lawrence Garfield, February 13, 1961 in Washington, DC) is quite intelligent, and despite his imposing physical appearance and manic performance style, he is a nice guy and something of a nerd, embracing the Internet and other technology at the cutting edge. (This may be because he initially cultivated the whole "physically imposing" deal to cope with rowdy, often-violent Black Flag shows).

In 1991, Henry and Joe Cole were accosted by a gunman and Henry watched his best friend get murdered in front of him by a gunshot to the head. Henry escaped unharmed, but this event was a considerable influence on his work for some time as reflected in a lot of his writing and spoken word afterward.

Now in his sixties, Henry is still in the same physical shape he has always been and is actively performing, writing, touring and kicking ass as much as ever.

If you would like to see a full list of everything he has published during his career, one option is to visit his official website at 21361.com

- it is enough to fill a(nother) book.

He can currently be heard bi-weekly on his podcast Henry and Heidi along with his assistant Heidi May.