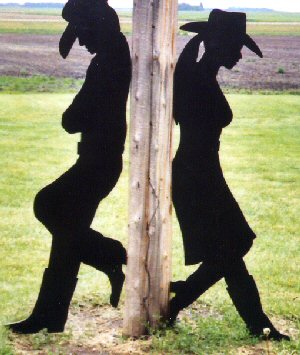 Shadows without a cause.
Hobbes: What are you doing?
Calvin: Being cool.
Hobbes: You look more like you're being bored.
Calvin: The world bores you when you're cool.
— Calvin and Hobbes
Advertisement:

Leaning slightly against something, arms folded, and one foot resting against the wall. Often the standard pose of the Aloof Ally, or the Hooker with a Heart of Gold. Cigarette and/or toothpick optional.

Why? Say you're not the Big Bad, and you can't pull off the Slouch of Villainy. But you're also not The Cape; you're a hero, but you want to rebel against something, because rebels are cool. Why not good posture?