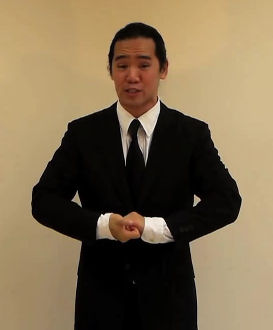 Apparently there is sound reason for this posture: pulling on one's arms expands the chest cavity, allowing for more lung capacity and thus volume. Perhaps a Discredited Trope, as it was probably done a lot more in the 19th century than today; modern classical singing technique expands the chest, sides, and back by other techniques which do not require alterations of a neutral standing posture, and a singer trained this way would have no reason to employ the hand-clasp.