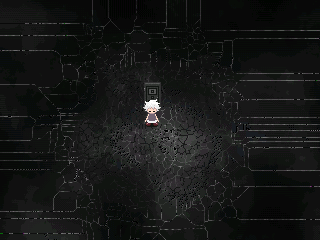 .flow is a freeware Yume Nikki fangame created in the RPG Maker 2000 engine by a Japanese developer going by the alias "lol" or "lolrust". Like Yume Nikki, exploration, surrealism, and atmosphere are the basic themes of the game; but unlike Yume Nikki, this one has a lot more disturbing content and horror elements added in. .flow, like Yume Nikki, is an incomplete game, but as of 0.10 and onwards, the game now has a proper endgame and multiple endings, though the "multiple" status is of some debate.

.flow stars a young girl known only as "Sabitsuki", who uses her computer — in one way or another, as the method is not explicitly mentioned — to explore a surreal world while collecting special abilities known as "effects". These effects change Sabitsuki's appearance, varying from a witch outfit and a broom to a corpse. Some effects, such as the whistle and the iron pipe, can affect NPCs and certain objects; although most effects only have a small animation or side-effect that can be activated, while some are simply cosmetic.

Much like the original, there are no provided explanations to what is seen or discovered in the game, and the game is practically textless outside of menus. Fans are left to speculate and come up with their own interpretations; most NPCs, events, and areas are all nicknamed by fans, be it from a filename or elsewhere.

The latest version, v0.194, can be found at lolrust's site here

, with an English translation available here

. Various other versions, both the Japanese originals and any translations, can be found on the fan wiki here

. The author, lol, has a personal site

Not to be confused with the 2006 freeware life simulation game flOw.

Note: Unless otherwise stated, assume all examples below apply to the latest version of the game. As well as this, due to the heavily speculative nature of the game, which relies on you coming up with your own interpretations and conclusions, please be careful about taking anything on the page as hard fact.

Beware of many unmarked spoilers!