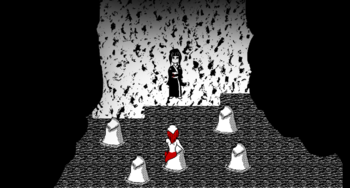 Ume and one of the mermaids she meets.
Advertisement:

I Cannot Drown is a Yume Nikki fangame by Pureiceblue in the RPG Maker MV engine. The game was originally made for Dream Diary Jam 3 on Itch.io and then updated in 2020 for Dream Diary Jam 4. In August 2021 it got it's 1.0.0 update as well as uploads to Newgrounds and Gamejolt.

The game can be played and downloaded from Itch.io

I Cannot Drown follows a woman named Ume who is in a monochrome cave alongside a rabbit, a red ball, and two holes. She receives a letter from someone known as Fu, who tells her that in order to escape the cave, she needs to go deeper and find all the effects. Like in Yume Nikki, Ume can collect a variety of abilities known as “effects” that change her appearance and allow her to interact with the world in different ways. Alongside effects, players can also find various body parts scattered throughout the various areas known as “parts”.

I Cannot Drown contains examples of: