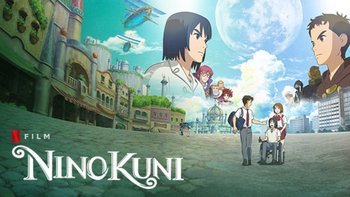 An animated film adaptation of Ni no Kuni produced by OLM and Warner Bros. It was released in Japan on August 23, 2019. It's an original story, heavily inspired by the premise of the original Ni no Kuni, instead of a direct or close adaptation. Netflix picked the film up as an 'Original' and streamed it on January 16, 2020.
Advertisement:

The movie is about high school friends Yu (Kento Yamazaki) and Haru (Mackenyu) who travel between the real world and a parallel fantasy universe to help their friend Kotona (Mei Nagano), whose life is in danger after she is stabbed by a mysterious assailant.