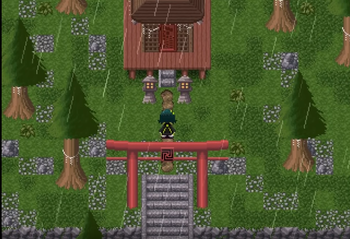 Hey, it's not an apartment this time!
Answered Prayers is a Yume Nikki fangame developed by a western developer named Klaufir. Like Yume Nikki, exploration and surrealism are prevalent features. But unlike Yume Nikki and most of its fangames, the game is notably Lighter and Softer, featuring minimal blood or gore and very few real horror elements.
Advertisement:

You play as Fluorette, a young girl who has run away from home and is taking refuge from a large rainstorm inside an odd shrine. Praying at the altar allows her to enter a mystical Spirit Realm full of mythical beings and supernatural creatures.