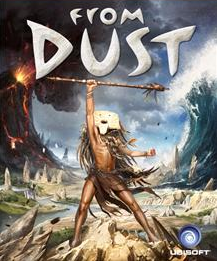 Released on 27 July 2011 on Xbox Live Arcade, and made available on Steam for the PC on 17 August 2011 and PSN on September 13, 2011, designed by Eric Chahi, published and developed by Ubisoft Montpellier, From Dust is a God Game, placing the player in the role of an unnamed, unseen god, tasked with protecting and enlightening a nomadic tribe. To aid this undertaking, the player is capable of manipulating the environment in miraculous ways.
Advertisement:

From Dust is notable for its nigh-unprecedented level of environmental detail. Plugging a waterfall with enough earth will cause the rivers resulting from the cascade to dry up. Lakes at the base of a volcano accrue sediment which increases their viscosity. Great tsunami waves will break against rocks and flow realistically over the land. It's also really, really pretty.

From Dust uses the following tropes: