Firing in the Air a Lot 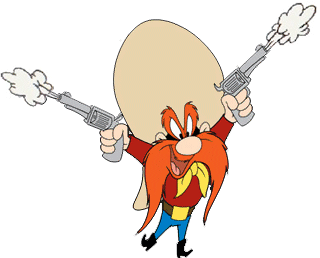 The villains ride off into the distance after terrorizing the locals. As they do, they fire off their revolvers into the air. Can also happen as they approach.

This activity is still around, except now the shooters use automatic rifles and stand still (or ride on the back of a Toyota Hilux). Real-life stock footage of Muslim extremists and South American/African revolutionaries, or generally happy people doing just this will often show up in news stories (for example after the capture of Saddam Hussein). It's sometimes referred to as "happy fire".

An increasingly common gag is to have the character waste most or all of their ammo in a manic fit of in air firing.

Remember: what goes up, must come down. Disregarding air resistance, a bullet fired straight up comes down at the exact same speed as it was when the bullet came out of the chamber. Thus far, few people have ever been shown being injured by a stray bullet from this display, which could impact the ground or injure/kill someone at about 200 MPH a fair distance away (this works out to a little under 300 feet per second; slow by ballistic standards, but fast enough to do damage if it lands in the wrong place). (The MythBusters have investigated the inherent possibilities, though...)

Shotguns are far safer in this regard and more tolerated by the authorities when fired in celebration by hunters, as the energy of birdshot pellets, which are very small and very low-mass, disperses quickly and beyond a few dozens of yards they are mostly harmless.

As usual, The Other Wiki has more details than you could ever reasonably ask.

Can overlap with Shouting Shooter. Compare Stab the Sky, A-Team Firing. Examples where the person doing the shooting is trying to accomplish something specific, like quell a Powder Keg Crowd or intimidate people, may fit better under "Shut Up!" Gunshot.