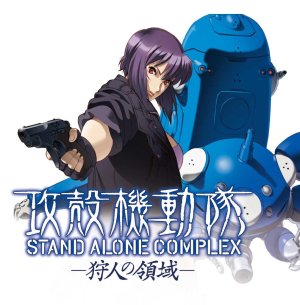 "What happens when technology subdues humanity? When humanity is no longer defined by being human?"
— Tagline from Stand Alone Complex's Adult Swim promo in early 2000s.
Advertisement:

Ghost in the Shell: Stand Alone Complex is a TV anime series and adaptation of Shirow Masamune's Ghost in the Shell manga. It tells the story of Public Security Section 9, a covert counter-terrorist task force working for the Japanese government in a Post-Cyberpunk future. Led by Major Motoko Kusanagi (a no-nonsense female cyborg), Section 9 specializes in the rising threat of cybercrime facilitated by the ubiquity of cybernetic bodies/implants in the future.

Stand Alone Complex features digital cel animation produced in full widescreen and a soundtrack by Yoko Kanno. Although the plot leans action-heavy and contains loads of political intrigue, it also features a strong focus on philosophical discussions of dehumanization through technology and synthetic life.

The world of Stand Alone Complex differs from the worlds of the two Ghost in the Shell feature films and the original manga: The feature films and the manga focus on Motoko Kusanagi and her evolution into something beyond human after her encounter with the Puppetmaster. Stand-Alone Complex, though, is more of a Police Procedural: it doesn't have the Puppetmaster show up in any form and Section 9 (including Kusanagi) exists as a fully functional team throughout.

Stand Alone Complex has two twenty-six episode seasons, Ghost in the Shell: Stand Alone Complex and Ghost in the Shell: S.A.C: 2nd GIG. Fans often abbreviate both seasons (for obvious reasons) as "GITS:SAC" (pronounced "Git-Sack" by the uncouth) and "2nd Gig". Like The X-Files and many other Speculative Fiction TV series, Stand Alone Complex features episodes dedicated to an ongoing Story Arc alternating with self-contained episodes which follow a single case and focus on character development or worldbuilding. The series identifies these various episodes by two letter code in their titles as being "Stand Alone" or "Complex" in season 1 and "Individual", "Dividual", or "Dual" in 2nd Gig. The first season's "Complex" story arc focuses on the Laughing Man incident, a highly publicized kidnapping by a master hacker who can hack cyberbrains in real time, and a government coverup that led to the original event. The second season's "Individual" story arc focuses on a terrorist cell known as the Individual Eleven, led by the mysterious Hideo Kuze, as well as a "Dual" story arc that focuses on Section 9's conflict with Kazundo Gouda's Cabinet Intelligence Service. GITS:SAC and 2nd Gig are available on disc either as full series, or as single discs edited down to focus on the main story. The edited versions last about two and a half hours each.

The 2006 Made-for-TV Movie, Ghost in the Shell: Stand Alone Complex - Solid State Society, takes place two years after the end of 2nd Gig; the story follows Section 9 as it struggles to deal with both Motoko's departure and a volatile refugee situation triggered by the actions of an entity known as the Puppeteer.

As noted above, the Ghost in the Shell franchise has four separate but equally legitimate continuities: 1) the original manga, 2) Mamoru Oshii's films (which themselves recreate and compress specific parts of the manga), 3) Stand Alone Complex and 4) Ghost in the Shell: Arise, a Continuity Reboot and an Origin Story for Section 9. None of the individual continuities have any direct relation to one another aside from variants on the setting and characters, although both movies and Stand Alone Complex make references to/offer recreations of specific scenes from the manga.

Game developer Nexon had developed an online First-Person Shooter based on the series. Ghost in the Shell: Stand Alone Complex: First Assault Online launched in December 2015, and was available through Nexon's website and Steam, but came to a close on December 6th, 2017.

You can watch the series on Hulu

(only in the U.S.). Due to providing funding for the series, Adult Swim holds permanent broadcasting rights. It is part of Toonami's "Regular Rotation" of shows they permanently own the airing rights to.

The series has also made an appearance in various Japanese Pachislot gaming machines, usually seen in pachinko parlors in cities.

On August 3, 2018, Production I.G announced a new installment, with two seasons consisting of 12 episodes each.

Ghost in the Shell: Stand Alone Complex contains examples of the following tropes:

open/close all folders
0-C
D-I
J-P
Q-Z
I thought what I'd do was, I'd pretend I was one of those deaf-mutes. ... Or should I?
Feedback

The Muscles in Batou's Head

"MISSING HEARTS". Motoko and Batou trade a bit of trash talk about the relative merits of masculine and feminine cyber-bodies, leading to her challenging him to a fight. They square off... and then she hacks his body to make him punch himself in the face and knock himself on his ass. As Motoko leaves, she quips that she'll expect a report later on how he "used the muscles in his head."

Example of:
Stop Hitting Yourself

The Muscles in Batou's Head

"MISSING HEARTS". Motoko and Batou trade a bit of trash talk about the relative merits of masculine and feminine cyber-bodies, leading to her challenging him to a fight. They square off... and then she hacks his body to make him punch himself in the face and knock himself on his ass. As Motoko leaves, she quips that she'll expect a report later on how he "used the muscles in his head."