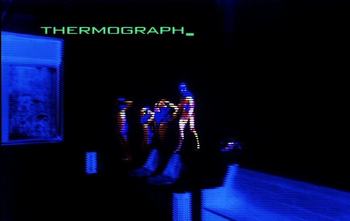 Whenever someone calls for the infrared camera on TV shows and film these days, either the handheld version or one mounted on Spy Satellites, the device will have amazing qualities, chief among them being able to see through walls. It's incredibly convenient for the good guys being able to make out what's happening inside the building. Sadly, real thermal imaging infrared cameras don't work like that at all. Heat simply doesn't go through walls in such a way to form a picture. Walls are generally supposed to stop heat from getting through them, which is why they are insulated. In fact an infrared camera meant for thermal imaging (as opposed to near-infrared), the kind most often seen on TV and movies, cannot even see through a sheet of regular glass that's perfectly clear to anyone using the Mark One Eyeball (this is the effect greenhouses are based on). Anyone looking at a sheet of glass with a thermal imager is more likely to see their own reflection. Steam is not good for IR either, but any light fog (which is usually cool) could be penetrable to an extent.

The truth is plainly obvious from all those televised high-speed chases in Los Angeles where the chase takes place at night so the Forward Looking Infrared camera on the police helicopter gets to show the Cool High Tech imagery. You can see the heat of the car engine, the tires, the ground where something hot has been, even the reflection of heat off the ground, yet you can't see the driver and his passengers although the few millimeters of metal making up the car body is a lot thinner than the several inches of material making up the average house wall. Not to mention, it conducts heat better. One can therefore conclude that either writers and directors don't watch Fox, or that it's yet another case of technology gone awry in the service of the plot.

Note, however, that there theoretically exist wavelengths on which the electromagnetic radiation behaves similarly to this trope. That's high-frequency microwaves (down from centimeter range), and imaging radars that use them. They are, however, very complex and expensive and are used only in some very specialized fields. Just one example would be the terahertz radiation (T-rays), which sits uncomfortably on the border between infrared and microwaves. It's hard to produce and hard to detect, but most non-conductive objects (walls, clothing, etc) are transparent to it while most conductive objects (metal, the water in your body) reflect it. Terahertz sensors (which, as noted above, have more in common with radars, rather than with the cameras), are already being used for airport security in a number of countries, and known as "nude scanners".