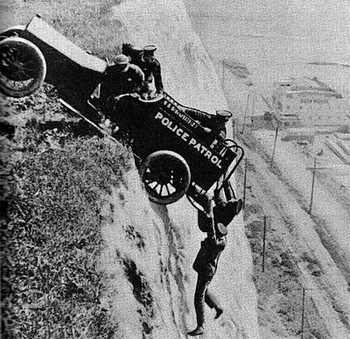 Hollywood's Finest!
Dan: “Dispatch, this is Johnson! Not only did I not apprehend the criminals, but I immediately crashed my car!“
Arin: “I deserve a promotion! Please respond.”
— Game Grumps, mocking a police officer

in A Way Out
Advertisement:

What the Imperial Stormtrooper Marksmanship Academy does for marksmanship, this trope does for police driving.

In Real Life, it's largely assumed that most law enforcement personnel are trained professionals in specialised top-quality vehicles when it comes to Car Chases. Their movie, television, video game, etc. counterparts, not so much. In fiction, especially if they're chasing the protagonists, they crash into fruit and/or vegetable carts, get cut off by closing railroad crossings and opening draw bridges, drive their vehicles into ditches or off cliffs, and run into any number of other snafus a real police officer (or anyone with a learner's permit) would know to avoid if at all possible. And the film-writers have apparently never even heard of police helicopters, since there's 'nary a one to be seen.

See also Car Chase, the supertrope Artistic License – Law Enforcement, and the subtrope Lemming Cops, which dials up the idiocy to ridiculous levels. Tends to hang out at the donut shop with Bad Cop/Incompetent Cop and Police Are Useless.