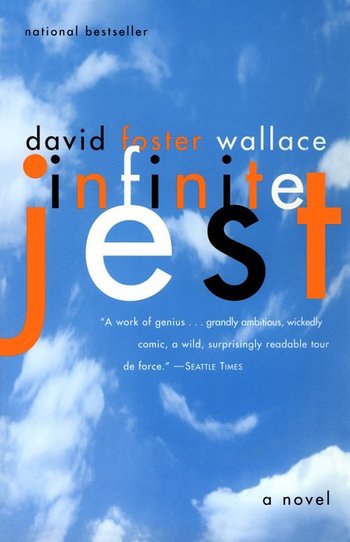 David Foster Wallace’s relentless Doorstopper of a novel, first published in 1996. Infinite Jest takes place in the not-too-distant future, around the Enfield Tennis Academy and the neighboring Ennet House Drug and Alcohol Recovery House in suburban Boston. There are roughly four narrative threads through the novel:

2.) Various Boston residents such as Don Gately and Joelle Van Dyne who hit rock bottom with their drug and alcohol addictions and turn to Ennet House as well as AA and NA meetings in order to stay on the wagon.

3.) The Organization of North American Nations, or O.N.A.N and a group of radical Québécois separatists known as Les Assassins des Fauteuils Rollents' (The Wheelchair Assassins) efforts to seek a film called Infinite Jest, directed by James O. Incandenza and rumored to be so absorbing that anyone who sees loses all other interests and eventually dies.

4.) The history of the Incandenzas, with a focus on the youngest son Hal.

On top of all that, the novel deals with issues like the nature of the self, family, emptiness and absence, addiction and recovery, and the minutia of tennis, there's just no way to adequately summarize this massively complex novel here. With nearly 100 pages of end notes, this may be one of the only novels for which you will need to use two bookmarks simultaneously.