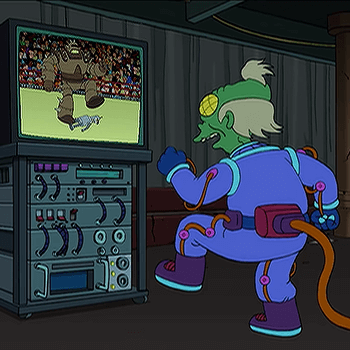 Spider-Man/Peter Parker: Anyway, Mr. Stark, you didn't have to come all the way out here. I had that, I was fine.
Tony Stark/Iron Man: Oh, I'm not... here.
(Iron Man's visor opens to reveal an empty helmet, as the camera cuts to Tony controlling his armor from the other side of the world)
Tony: Thank God this place has Wi-Fi, or you would be toast right now.
— Spider-Man: Homecoming
Advertisement:

A character has one or more bodies that can be operated remotely. Likely with equal or greater performance than if said character was physically present. Distinct from Fighting a Shadow in that the character is not an Eldritch Abomination with only a small piece sticking out in our time and space, but a person (human, alien, whatever) that operates a separate device or number of devices. Although, this distinction can get a little messy if, for example, a Brain in a Jar or a digitized mind was given remote control of one or more machine bodies.

Perhaps they are robots, cloned cyborgs, hard light, zombies, whatever. For story purposes what matters most is whether or not Your Mind Makes It Real, to what degree they are synchronized, and if the connection can be sabotaged.