Little Green Man in a Can 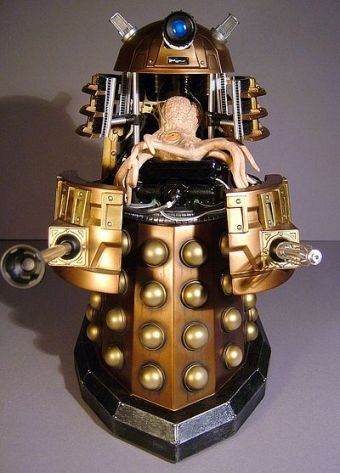 Exterminate!
Gilmore: What are we looking for, little green men?
Seventh Doctor: No, little green blobs in bonded polycarbide armour.
— Doctor Who, "Remembrance of the Daleks"
Advertisement:

It's something that tends to happen with particularly advanced mentor-like alien species, Sufficiently Advanced Ancient Astronauts and the like. You don't want to be something as uninspiring as a Rubber-Forehead Alien nor something as unphysical as an Energy Being while also maintaining some sense of secrecy and wonderment, so you take the "astronaut" idea and run with it. The aliens end up wearing large all-enclosing hazmat-like encounter suits that shield their frail physical selves from the elements.

The great thing is that because you don't know what their encounter-suited butts look like, they could be anything! The variety of abnormal suit shapes that can be worn by a performer is also greater than the variety possible with rubber faces. People in Rubber Suits still need the full detail and design of a whole new species, while this trope leaves things to the imagination. A permanent life in an encounter suit can also be justified a lot more than Humanoid Aliens: they have Bizarre Alien Biology that can't stand our atmosphere, they're physically very frail by comparison, so it works like Powered Armour and similar things.